Over 34 million Americans suffer with type 2-diabetes. The U.S. Centers for Disease Control and Prevention (CDC) relates that the incidence of type 2 diabetes (formerly known as adult-onset diabetes) has risen by 33 percent in the previous decade, now 1 out of 10 American adults currently have this diet-related condition. Diabetes is the seventh leading cause of death in the United States. Diabetes is the No. 1 cause of kidney failure, lower-limb amputations, and adult blindness. In the last 20 years, the number of adults diagnosed with diabetes has more than doubled.Long-term outcome for those with the disease isn’t good. 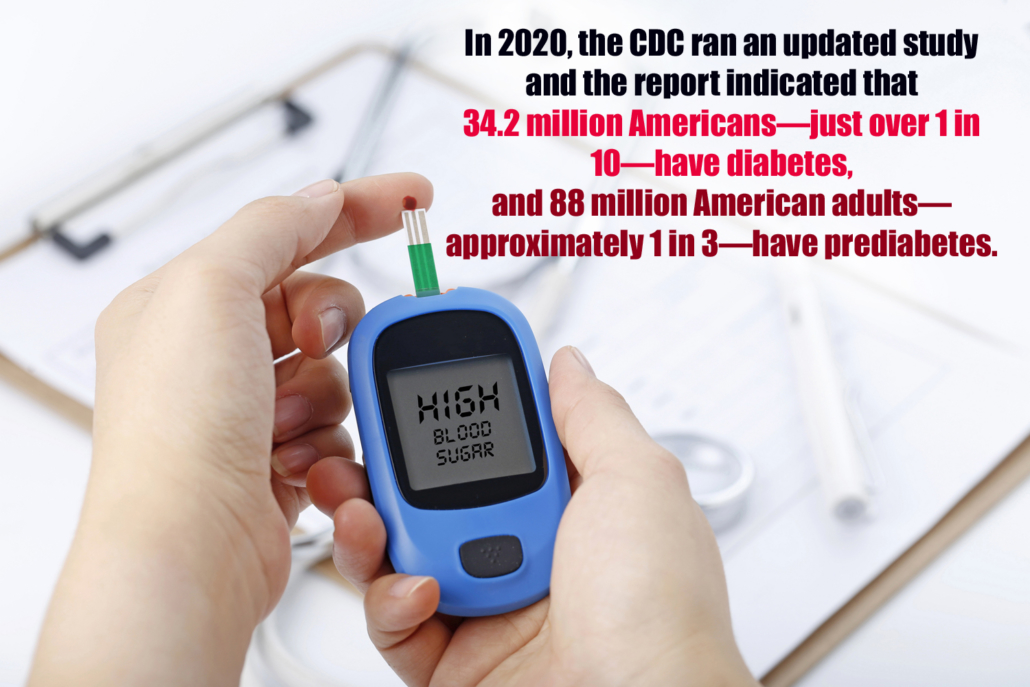 People with type-2 diabetes have an average life expectancy 15 years less than those without diabetes. Heart disease and stroke account for about 65% of deaths in people with diabetes. The risk of stroke is also found to be 2 to 4 times higher in people with diabetes. Unfortunately, the news has gone from bad to worse with the FDA’s warning about the dangers of two common diabetic drugs, Avandia and Actos. 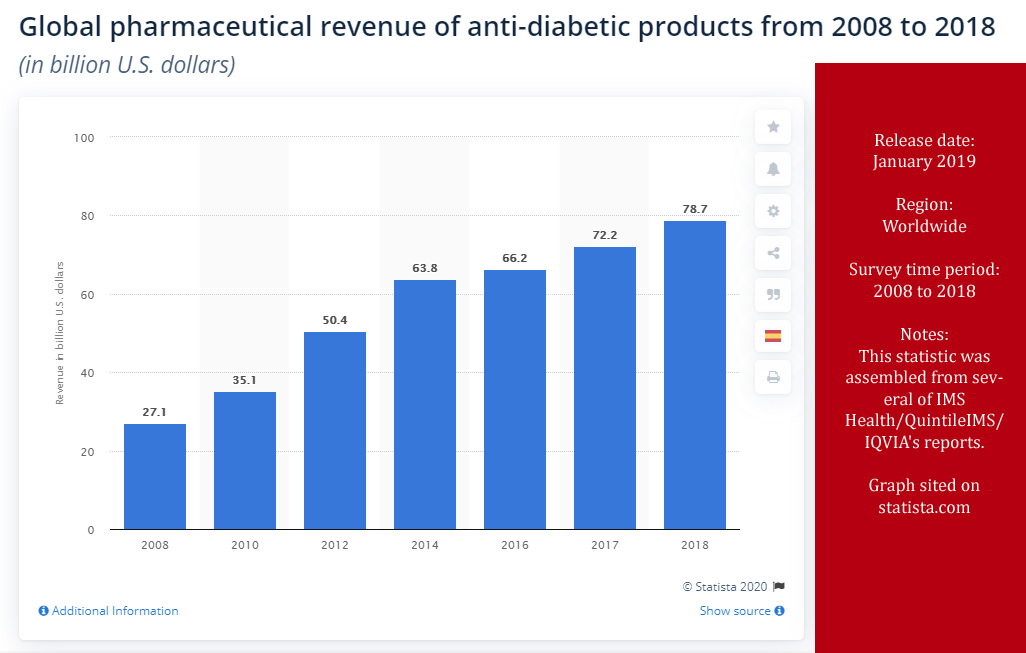 Dr. David Graham, a drug safety officer with the FDA’s Office of Surveillance and Epidemiology, estimates that Avandia has caused as many as 205,000 heart attacks and strokes, some of them fatal, between 1999 and 2006. Graham’s analysis indicates that since Avandia was approved, some 80,000 patients have died from the drug’s side effects. For every month that Avandia is sold, he said, 1,600 to 2,200 patients will suffer more of these events.

GlaxoSmithKline LLC, based in London, told the agency of the risk two years ago. Yet, the FDA failed to pass along the warning to the one million Americans who already take the drug. There’s probably $2.2 billion reasons why this information wasn’t made public until this year. Only after researchers at the Cleveland Clinic forced the FDA to take notice, did the word get out to the media.

Since three quarters of all diabetics die from heart disease related conditions, doesn’t it seem strange that the drugs doctors commonly recommend for controlling diabetes actually increase the incidence of cardiovascular related deaths? I believe it does. So does Gerald Del Pan, director of the Office of Surveillance and Epidemiology, who has voiced his concerns about Avandia by stating “Cardiovascular disease being the leading cause of death of people with diabetes, having a treatment that causes that is something that doesn’t make sense to me.” It doesn’t make sense to me either. And to add fuel to the fire, recent evidence suggests thiazolidinediones are associated with an increased risk of peripheral fractures in post-menopausal women.

Other commonly used diabetic drugs known as sulfonylureas (DiaBeta, Micronase, Glynase, Diabinese, Glucatrol, Orinase, Tolinase, and Amyrel) are also associated with an increased risk of heart attack and strokes. Orinase has been shown to increase the risk for heart attack and stroke by 300 percent and increases the risk of death from all illnesses by 250 percent over those taking a sugar pill. 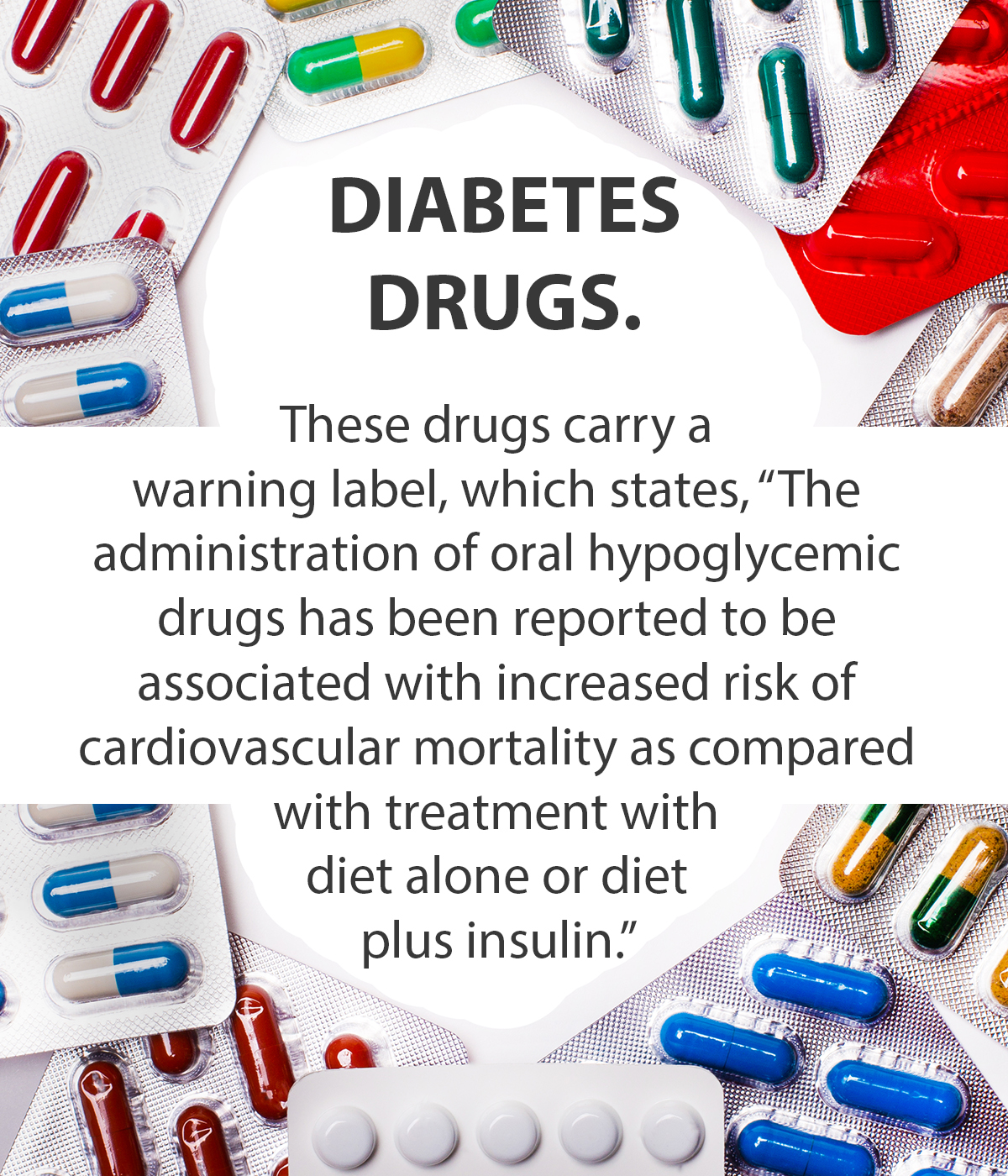 Insulin sensitizers or enhancing drugs including Metformin (Glucophage) and Phenformin are known as biguanides. Metformin is now the most commonly prescribed oral anti-diabetic drug in the world. It works by increasing insulin sensitivity in the liver. It also has a number of other beneficial effects, including weight loss, reduced cholesterol-triglyceride levels, and improved endothelial function.

Metformin is tolerated better than many other anti-diabetic prescription drugs. And I believe it to be the safest of the diabetes-drugs. However, it’s not without potential health risks. Those taking Metformin should be made aware that it’s associated with lactic acidosis. Lactic acidosis is a rare but serious complication that can occur due to glucophage accumulation and is fatal 50% of the time. Phenformin was pulled from the market in 1977 due to an increased risk in developing lactic acidosis, Metformin has avoided being banned by the FDA and most doctors including myself believe this medicine is the safest of the diabetic drugs. 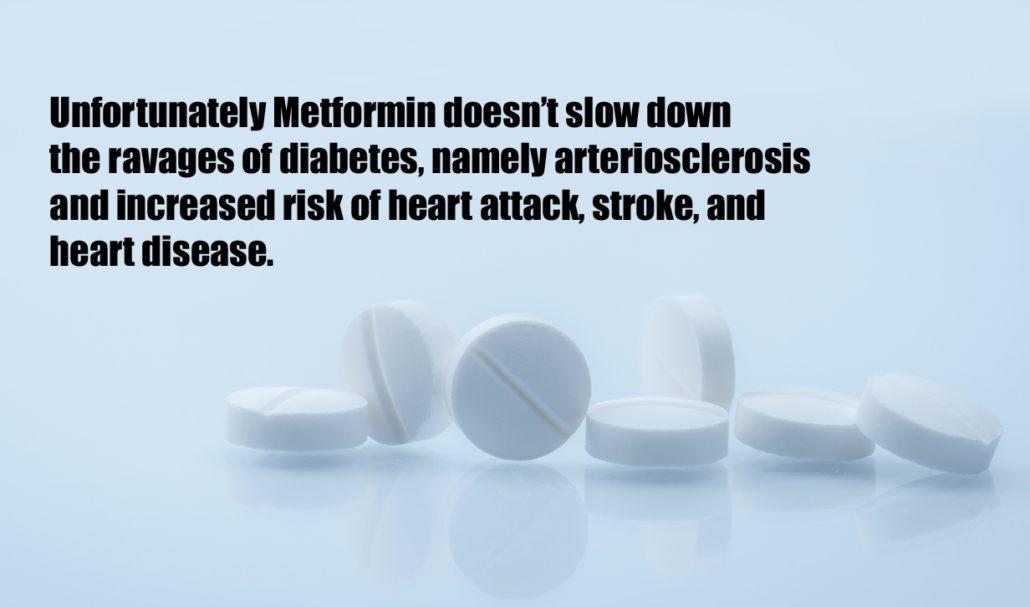 I’ve discovered that my patients who follow my advice and take additional nutritional medicines along with their Metformin enjoy the best health. And even better, many of my patients are able to avoid or discontinue Metformin after following my advice below.

The synergistic ingredients in this formula have proven to dramatically reduce elevated blood sugar and A1C levels.

And by the way, before it was pulled from the market the warning bells rang loud and clear; Phenformin cousin of Metformin, was found to increase the risk of heart disease deaths by 300 percent. Once again like so many illnesses, once you get past the smoke and mirrors, the recommended medical “cure” is often worse than the illness. The type-2 diabetic now faces a dilemma. Do they suffer with the advances of unchecked diabetes, including risk of heart attack, stroke, and an increased risk of cardiovascular disease death? Or do they take conventional anti-diabetic drugs and increase their risk of heart attack, stroke, and death from cardiovascular disease?

What about insulin therapy you may ask? Good question. Before insulin therapy, type 1-diabetes meant a life of misery and premature death. Insulin is a life saving and therefore essential therapy for type 1 diabetes. The number of medical professionals advocating insulin therapy for type 2- diabetes continues to grow. However, its use isn’t without risk. Insulin stimulates weight gain, a known risk factor for cardiovascular disease. As patients on insulin therapy gain weight so do their requirements for increased insulin.

The majority of patients, approximately 90%, are non-insulin dependent type 2 diabetic, and suffer from poor diet, obesity, and inactivity, not from a lack of insulin. I encourage my patients with type 2- diabetes to try neutraceutical therapies instead. Certainly I recommend insulin therapy for those patients who need it but I also recommend they use the nutritional supplements below as well. Since patients who use insulin develop a tolerance for it and must use more and more over time (eventually becomes ineffective) -the goal for those using insulin should be to use the least amount as possible. Combining the appropriate nutritional medicine recommendations below along with insulin therapy helps to reduce the amount of insulin needed on a daily basis.

In the fight against type 2-diabetes there are dozens of safe and effective neutraceutical therapies. I’ll mention a few of my favorites below. Corosolic acid is found in the leaves of the banaba plant that grows in the Philippines. Subjects using a corosolic acid preparation called Glucotrim each day for two weeks experienced a 30 percent drop in blood sugar levels. Researchers considered both levels of blood sugar reduction significant. Corosolic acid may be defined as a phyto-insulin or insulin-like plant extract. And how about this for a potential side effect, subjects receiving the corosolic acid seem to show an increased tendency toward weight loss (an average weight loss of 3.2 pounds).

Gymnema sylvestre, an Indian herb used in Ayurvedic medicine, lowers the 2-hour postprandial (after meal) plasma glucose (blood sugar) concentrations, by 13 percent (207 vs. 180mg/dl).
Gymnema Sylvestre research reveals that it lowers HbA1c from 10.1% to 9.3%. This is as good if not better than common diabetic drugs. And with no side effects! Studies that show that alpha-lipoic acid (ALA) speeds the removal of glucose (sugar) from the blood of people with diabetes and that this antioxidant may prevent kidney damage associated with diabetes. And several studies suggest that treatment with ALA may help reduce pain, burning, itching, tingling, and numbness in people who have nerve damage caused by diabetes. In several studies, the mineral biotin has been shown to enhance the performance of insulin. Biotin supplements can also increase the activity of an enzyme, glucokinase, which the liver uses early in the process of utilizing blood sugar. Biotin plays a valuable role in regulating blood sugar. 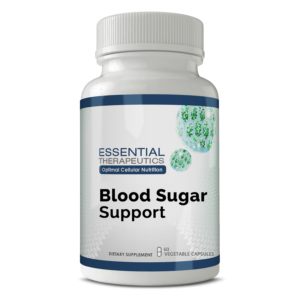 Chromium is an essential mineral for human nutrition and aids in the normal function of insulin. In 12 out of 15 controlled studies of people with impaired glucose tolerance, chromium supplementation was found to improve some measure of glucose utilization or to have beneficial effects on blood lipid profiles. The type 2- diabetic dilemma – do they suffer with the advances of unchecked diabetes, including risk of heart attack, stroke, and an increased risk of cardiovascular disease death? Or do they take conventional anti-diabetic drugs and increase their risk of heart attack, stroke, and death from cardiovascular disease? – Now becomes clear. Take the right drug (Metformin or insulin), only if you need it and begin taking safe all natural nutritional therapies that have been clinically proven to help prevent and reverse diabetes.

Berberine is a Chinese herb that comes from the Coptis chinensis French herb, which has been used in China to treat diabetes for thousands of years. I’ve found berberine to be an excellent natural way to lower elevated blood sugars. The results are often dramatic, especially when combined with other synergistic herbals.

In a randomized trial of 116 patients with newly-diagnosed with type 2 diabetes, Yifou Zhang et. al. examined the effects of berberine (500mg, twice daily) compared to placebo.

Another trial compared berberine (500mg, three times daily) to the prescription diabetes drug metformin. After thirteen weeks, berberine performed as well as metformin in reducing HBA1c, but had beneficial effects on lowering total cholesterol and triglycerides (though not LDL or HDL) that metformin did not exhibit.

Bitter melon grows on the vine of the Momordica charantia plant. It is the most bitter of all fruits and vegetables. Medical experts have found the substance to be important in controlling diabetes naturally. Over time, there have been a series of clinical trials that confirm the benefit of bitter melon for reducing elevated blood sugars.

One trial, published in the Journal of Ethnopharmacology revealed that if one takes 2000mg of bitter melon for diabetes juice continuously daily, the patients’ blood sugars reduce steadily. It assists both patients suffering from diabetes type-1 and type-2.

Banaba is an herbal remedy extracted from the leaves of Lagerstroemia speciosa, a tree native to Southeast Asia. Long used in folk medicine, banaba is available in supplement form. In a study published in Diabetes Research and Clinical Practice, researchers evaluated the effect of the banaba compound corosolic acid and found that those who had ingested corosolic acid had lower blood glucose levels 90 minutes later, according to an oral glucose tolerance test.

RECOMMENDED TO LEARN MORE ABOUT:

Save 20% on the all natural Blood Sugar Support formula use this code:  SUGAR20

Of course the best way to treat type 2 diabetes and elevated blood sugar is to lose weight. My type 2 diabetic patients typically lose 20 or more pounds a month and their hemoglobin A1c and blood sugar levels are drastically reduced over a 2-3 month period. Most are able to reduce or totally eliminate their type 2 diabetic medications. 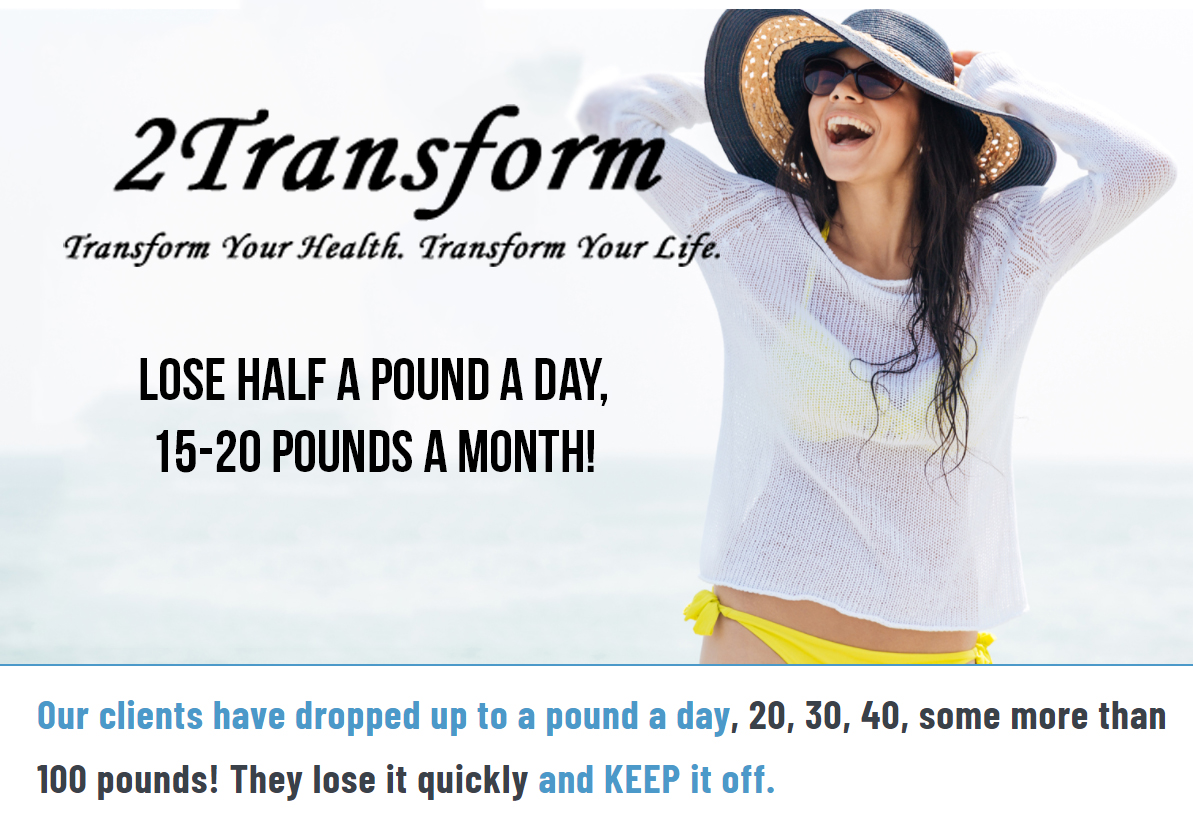