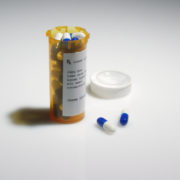 Benzodiazepines
These medications are usually used as sleep and anti-anxiety medication, they include Xanax (alprazolam), Klonopin (clonazepam), Ativan (lorazepam), Restoril (temazepam), BuSpar (buspirone hydrochloride), Tranxene (clorazepate dipotassium), Serax (oxazepam),
Librium (chlordiazepoxide), Tegretol (carbamazepine), Valium (diazepam), Trileptal (oxcarbazepine), Seroquel (quetiapine), Risperdal (risperidone), and Symbyax (olanzapine and fluoxetine HCl).
Benzodiazepines are addictive, and patients build up a tolerance so that the drugs eventually lose effectiveness as a sleep aid. Addiction may occur in as little as two weeks.
The big problem with these medications, though, are the side effects, many of which mirror the symptoms of fibromyalgia and CFS. And they don’t promote deep, restorative sleep, so they are definitely not worth the risk.
Benzodiazepines depress the central nervous system and act on the neurotransmitter GABA (gamma-amino butyric acid). GABA acts as a calming chemical as it transmits messages from one cell to another. So directly or indirectly, these drugs influence almost every brain function and most other bodily systems, including those of the nervous, neuromuscular, endocrine, and gastrointestinal systems. It’s no wonder their side effects are so severe.
Benzodiazepines should be weaned off, starting as soon as possible. Be sure to work with a medical doctor as you wean off, and take it slow to avoid terrible withdrawal symptoms.
Potential side effects of benzodiazepines: Poor sleep; seizures; mania; depression and suicidal thoughts; tinnitus (ringing in the ears); transient amnesia; dizziness; agitation; disorientation; low blood pressure; nausea or vomiting; fluid retention; muscular incoordination and tremors; sexual dysfunction; prolonged drowsiness or a trance-like state; fatigue; headaches; body aches and pains; chills; runny nose; cough; congestion; difficulty breathing; feelings of discouragement, sadness, or emptiness; diarrhea; difficulty swallowing; vision and voice changes; and a host of others.
The crippling side effects and addictive nature of these drugs have been known for at least 40 years, yet doctors continue to prescribe them at an ever-increasing rate, especially for seniors. Surveys show that over 5.6 million adults over the age of 65 are now taking benzodiazepines. A mouth-dropping 50% of all women 60 and older will be prescribed a benzodiazepine drug.
And since addiction often occurs within four weeks of starting these drugs, the majority of these folks are now dependent on them.
Tolerance to the hypnotic (sleep) effects of these drugs may occur within one week. Symptoms of tolerance are identical to drug-withdrawal symptoms and may include anxiety, panic, severe insomnia, muscle pain and stiffness, depression, suicidal thoughts, rage, heart and lung problems, and agoraphobia (extreme fear of public or crowded spaces).
Tragically, only 10%–30% of people are able to successfully stop taking these drugs. The rest are addicted for life.
Please avoid these drugs if possible. Seek out alternatives, preferably over the counter natural amino acid therapy (5HTP, SAMe, L-Theanine, etc.) when facing anxiety disorder. For sleep related issues try over the counter 5HTP and or melatonin. You can read more about mood and sleep disorders at www.treatingandbeating.com
https://yourfibrodoctor.com/wp-content/uploads/2014/03/file00011286252-1.jpg 1680 2240 Dr. Rodger Murphree & Team https://yourfibrodoctor.com/wp-content/uploads/2018/08/YOUR-FIBRO-DOCTOR-LOGO-left.png Dr. Rodger Murphree & Team2011-01-12 18:50:002018-08-08 14:16:31Danger-These Drugs Are A Disaster For Your Health
14 replies