I know this may sound odd, but fibromyalgia doesn’t cause anything! It’s simply a name that describes a group of symptoms that make up the syndrome known as fibromyalgia.

But fibromyalgia doesn’t cause chronic pain, fatigue, poor sleep, irritable bowel, restless legs, brain fog, anxiety, or depression commonly associated with the syndrome. These symptoms or warning signs, are simply a clue that something is wrong with one or more of the body’s systems-Thus the warning sign. 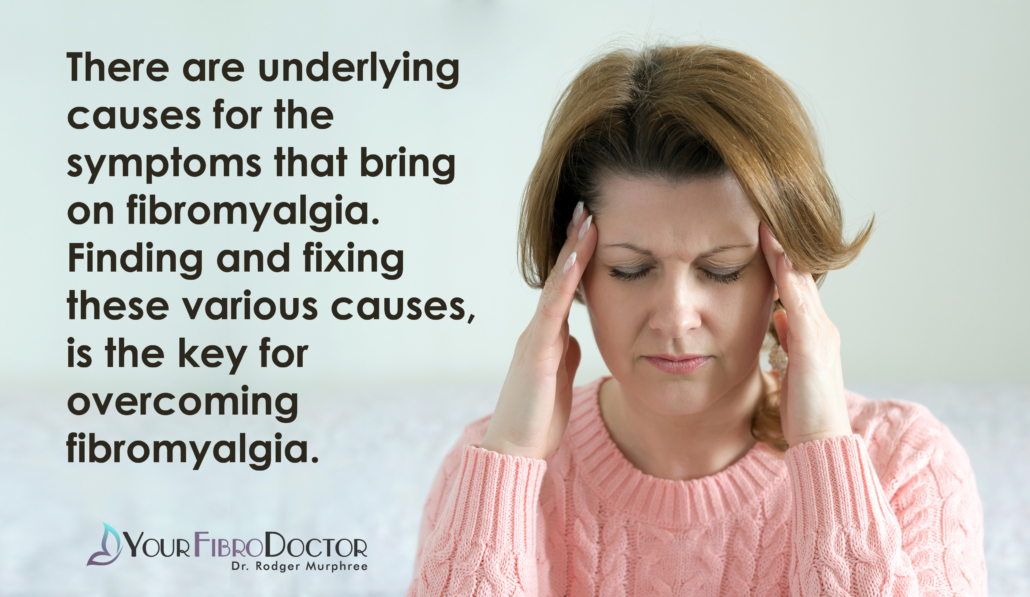 It’s worth repeating-fibromyalgia is a name, a name given to a group of common symptoms associated with the syndrome known as fibromyalgia. It doesn’t cause the symptoms!

Doctors typically spend less than 10 minutes with their patients. There is little time to find the underlying causes of fibromyalgia. Instead doctors are focused on reducing or suppressing the symptoms of fibromyalgia with drug therapy. Drugs can be helpful, especially short term, and sometimes they are the best, or only option. However, drugs treat symptoms, not causes. Drugs don’t make you healthy, and to reverse fibromyalgia you must get healthy.

Sweeping the Symptoms Under The Fibromyalgia Rug

Low energy, headaches, migraines, low moods, constipation, hair loss, tingling in the hands and feet, and weight gain are simply dismissed as being due to fibromyalgia. They are also the symptoms of adrenal fatigue and low thyroid function, not fibromyalgia.

Unfortunately for busy, sometimes fibromyalgia illiterate doctors, its simpler to sweep these symptoms under the fibromyalgia rug, than to take the time to do the detective work-really listening, doing more advanced testing, research, thinking outside the box, to uncover the cause or causes of these warning signs.

Doctors don’t know, or choose not to accept, that low thyroid and or adrenal fatigue often don’t show up on routine testing. More detective work is needed. Its easier and faster to simply cover up the symptoms associated with fibro than to take the time to find the causes.

But treating the symptoms and failing to correct the causes often creates more problems.

The “common” side effects of Lyrica include:

The most common side effects for Savella and Cymbalta include:

No Problem We Have A Drug For That

If the Lyrica or Savella are causing constipation, no problem, the doctor can recommend Linzess for the irritable bowel syndrome on your next visit. And if Linzess causes stomach pain, bloating and gas, as it often does, then no problem your doctor will recommend Bentyl on your following visit. Of course you can see where I’m going with this-one drug leads to more symptoms and more drugs to cover up the symptoms.

Oh, by the way, the side effects of Bentyl include:

I’m not anti-drug, I’m really not, because there’s definitely a time and a place for drug therapy. When I’m working with my patients, I’m a realist and if they need medications, so be it. I’m going to try everything naturally first, because the high dose, but right combination of vitamins, minerals, amino acids, and essential fatty acids is where our brain chemicals and stress coping hormones come from.

What you really want to do is find and fix the underlying causes of fibromyalgia-Not cover up the symptoms with potentially life draining drugs.

You don’t get healthy taking Cymbalta, Ambien, Lyrica, Gralise, or Neurontin. Those drugs don’t make you healthy. In fact they increase the odds you’ll become sicker. We know that Ambien can cause the very symptoms we see in fibromyalgia. It can cause fibro fog, diffuse achy muscle pain, lethargy, fatigue, anxiety, depression, Restless Legs syndrome, poor memory, mood disorders … that’s really a mirror image of what you see with fibromyalgia. The antidepressants Cymbalta, Effexor, Savella, Pristiq, the different medications that they recommend for fibromyalgia actually deplete your natural sleep hormone melatonin.

Because of that, they can interfere with deep restorative sleep. They can cause diffuse achy muscle pain, depression and anxiety. The list goes on. There’s always the potential when you take a medication that it can cause side effects. These are then associated with your fibromyalgia. You’re taking Ambien or many of the common drugs used for the symptoms of fibromyalgia including Neurontin, Lyrica, antidepressants, Xanax, Klonopin, pain meds, and now you have fibro fog. You can’t remember your name, your spouse’s name, what day it is and what you’re talking about doesn’t make sense … they tell you it’s your fibromyalgia. Ambien, Klonopin, Cymbalta, Neurontin, and Lyrica can all cause fibro fog symptoms!

Tranquilizers are often prescribed for restless leg syndrome; achy, tight muscles; and sleep problems. But these drugs deplete the sleep hormone melatonin, which then leads to a disruption of a person’s circadian rhythm (sleep-wake cycle). Instead of promoting deep, restorative sleep, these drugs prevent it!

It’s important to realize that your drug or drugs may be causing or contributing to some or all of your symptoms. I spend a great deal of time with my new patients reviewing and discussing their current drugs—how they interact with each other, and the potential side effects. I often find that by asking the right question, I can help the patient realize that her symptoms began or worsened soon after the drug treatment began.

Sometimes, though, I do find drug-induced symptoms that began months after the start of the drug treatment. Drugs deplete essential nutrients that the body needs to properly function, but it can take weeks, months, or even years for the drug to fully deplete the nutrient and for you to see the side effects surface.

A study conducted by the Mayo Foundation for Medical Education and Research demonstrates the need for FMS and CFS treatment beyond drug therapy. Thirty-nine patients with FMS were interviewed about their symptoms. Twenty-nine were interviewed again ten years later. Of these twenty-nine (mean age fifty-five at second interview), all had persistence of the same FMS symptoms. Moderate to severe pain or stiffness was reported in 55 percent of patients, moderate to a great deal of sleep difficulty was noted in 48 percent, and moderate to extreme fatigue was noted in 59 percent. These symptoms showed little change from earlier surveys.

The surprising finding was that 79 percent of the patients were still taking medications to control symptoms. We can conclude that the medications weren’t making a significant impact.” Traditional doctors continue to rely on prescription medications to treat fibromyalgia, even though their own studies show them to be ineffective and potentially dangerous. They know the drugs don’t work. This is why they will tell you to “learn to live with it.”

Fixing The Causes Of Fibromyalgia Begins With Addressing These Four Core Underlying Triggers That Cause Or Aggravate The Common Fibro Symptoms.

By using the Jump Start supplements and protocols you can dramatically reduce or even eliminate the majority of your fibro symptoms including: 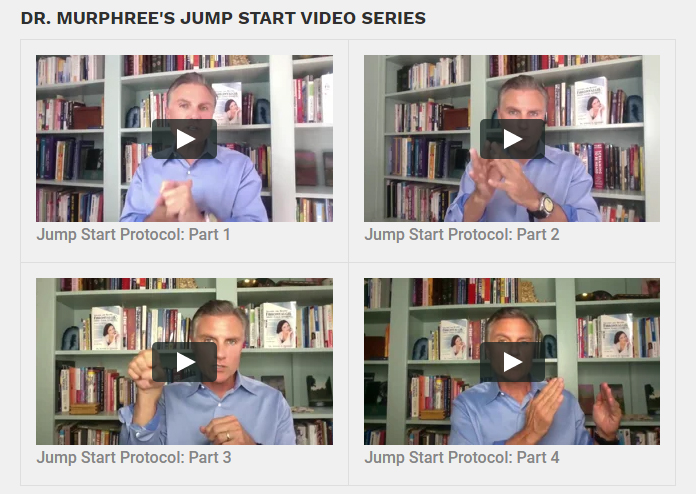 SAVE 15% ON YOUR FIRST ORDER USE FIBROSALE15 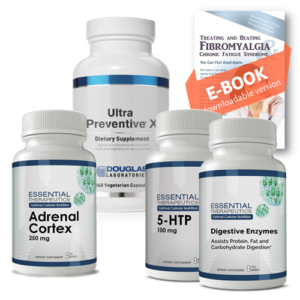 P.S. Here’s a bonus video replay of a training I did this summer on the Jump Start Protocols: