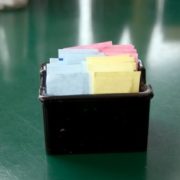 The Health Dangers of NutraSweet-Fibromyalgia and Aspartame
Aspartame can be found in most diet sodas and in other artificially sweetened food products. Commonly known as NutraSweet or Equal, it is broken down by the body into methanol and formaldehyde.
Toxic levels of methanol are linked to systemic lupus and now Alzheimer’s disease.
Methanol toxicity can cause depression, brain fog, mood changes, insomnia, seizures, and similar symptoms associated with multiple sclerosis. As for formaldehyde, it is grouped into the same class of drugs as cyanide and arsenic.
An EPA assessment of methanol states that methanol “is considered a cumulative poison due to the low rate of excretion once it is absorbed. In the body, methanol is oxidized to formaldehyde and formic acid; both of these metabolites are toxic.” They recommend a limit of consumption of 7.8 mg/day. A one-liter (approx. 1 quart) aspartame-sweetened beverage contains about 56 mg of methanol. Heavy users of aspartame-containing products consume as much as 250 mg of methanol daily or 32 times the EPA limit.
When the temperature of aspartame exceeds 86 degrees F, the wood alcohol in the product is turned into formaldehyde and then into formic acid. Formic acid is the poison contained in the sting of a fire ant.
There are over 92 documented symptoms from the use of aspartame.
Aspartame accounts for over 75 percent of the adverse reactions to food additives reported to the FDA. Many of these reactions are very serious including seizures and death. A few of the 90 different documented symptoms listed in the report as being caused by aspartame include: Headaches/migraines, dizziness, seizures, nausea, numbness, muscle spasms, weight gain, rashes, depression, fatigue, irritability, tachycardia, insomnia, vision problems, hearing loss, heart palpitations, breathing difficulties, anxiety attacks, slurred speech, loss of taste, tinnitus, vertigo, memory loss, and joint pain.
Could Aspartame be contributing to your fibromyalgia or CFS symptoms?
One common complaint of persons suffering from the effect of aspartame is memory loss. Ironically, in 1987, G.D. Searle, the manufacturer of aspartame, undertook a search for a drug to combat memory loss caused by excitatory amino acid damage.
One expert, Dr. Olney, a professor in the department of psychiatry, School of Medicine, Washington University, a neuroscientist and researcher, and one of the world’s foremost authorities on excitotoxins. (He informed Searle in 1971 that aspartic acid caused holes in the brains of mice.)
For more information about the dangers ofAspartame see AspartameSweetpoison, written by author Dr. Janet Starr Hull.
https://yourfibrodoctor.com/wp-content/uploads/2014/02/iStock_000000841237XSmall-1.jpg 282 425 Dr. Rodger Murphree & Team https://yourfibrodoctor.com/wp-content/uploads/2018/08/YOUR-FIBRO-DOCTOR-LOGO-left.png Dr. Rodger Murphree & Team2012-02-29 13:00:002018-08-08 14:44:13If You Have Fibromyalgia or CFS-Avoid NutraSweet
1 reply