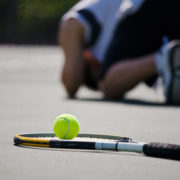 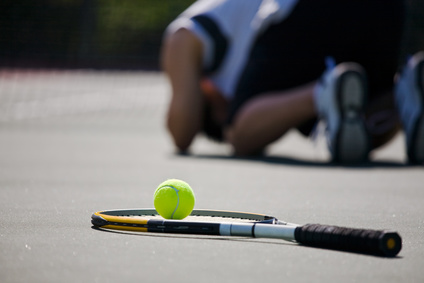 I sat with my head down between my knees, sweat running down my face, and I’d never been so humiliated. How would I recover from such a devastating defeat? I felt the inner pain of failure and I was determined never to feel it again.

Several years ago, ok, many, many, years ago I was a tournament tennis player. I played daily before High School, and every free moment when not working after school or playing team sports. I became obsessed with tennis. I regularly beat my friends, and even did well in some of the round robin tennis tournaments at my tennis club. I thought I was pretty good.

I decided I was ready to play in some local tennis tournaments around town and made the mistake of inviting my family and friends, including my girlfriend who I’d been trying to get a date with for months.

I knew I was in trouble the moment I stepped foot on the court. My opponent not only had his entourage of friends and family, but he had a coach sitting courtside talking strategy before the match…

This guy was serious.

Afterwards, I sat there, head between my knees, exhausted, embarrassed, feeling like a loser, with friends and family and my new girlfriend, watching from the stands.

After what seemed like an eternity, I righted myself, and walked into the stands where I accepted the usual words of encouragement, “you’ll get him next time,” and “don’t worry you’ll do better,” from family and friends. Even my girlfriend was supportive. But I felt like a failure.

Later that night I decided I still wanted to play tennis, and even play tournaments. I realized, I would need to take lessons at the least and perhaps even get a coach to help me reach my potential.

I knew I needed help. I saved my paper route money, started taking lessons and eventually worked with a tennis coach. I wish you were reading about me in Tennis Magazine or how I’ve just won Wimbledon, but truth is I didn’t make the pro circuit.

I did, however, have a chance to avenge my loss, meeting the same player two years later in a junior’s tournament. And thanks to great coaching I won that match. I have spent many hours playing tennis, enjoying being outdoors, and other player’s fellowship. Teaching my boys how to play tennis.

And more importantly I now have a life long sport, one that I can play well into my senior years. It was well worth the money I spent on coaching lessons.

I believe that a lot patients with fibromyalgia are made to feel like failures. They’ve tried year after year to get better, to feel good again, but just haven’t been able to come up with something that works. Most have tried numerous doctors and drugs, only to learn that conventional medicine alone doesn’t provide long-term relief. Many eventually give up on conventional medicine to seek out over the counter remedies. Unfortunately, taking a handful of supplements or trying one fad diet after another doesn’t work.

Most resign themselves to “learning to live with it.” And many become upset when they hear about or read that someone has in fact beaten fibromyalgia. It can be done. I know for many it seems impossible. It seemed impossible that I can have ever beaten Jimmy Sikes in tennis, but eventually I did.

The difference for most who try and fail to get better is they are one, relying on drug therapy alone, which never works, at least long term. Covering up the symptoms of fibromyalgia with drugs only leads to more symptoms.

Or two, trying to do it on their own, taking random supplements, using various drugs, trying one diet or another, doing so without a coach.

My patients who share their success stories in my book and on my site each week, who do in fact beat fibromyalgia, do so by working with me personally, their health coach. They, like me years ago, realized they needed help. They couldn’t do it alone. They needed a coach, fibromyalgia expert to help them uncover where they were broken down and what to do to fix it.

I use special testing to find and fix the underlying causes of their fibro symptoms. This takes the guesswork out of trying to figure it out by themselves. By correcting not covering up symptoms, with the right combination of diet, vitamins minerals, amino acids, essential fatty acids, and novel supplements, I coach them on what they need to do to get healthy and stay healthy.

Yes, fibromyalgia is hard to overcome, but it can be overcome. And my patients who do overcome it, don’t care what we call it, they are just glad to have their life back.

If you are struggling to figure out how to get healthy and stay healthy, then may I suggest that you too, may need a health coach, and I’m available.

She Told Everyone I Got Her Pregnant
Scroll to top