The Corona virus has killed more over 60,000 people and infected over 1 million, and has spread to at least 204 countries.

The World Health Organization (WHO) has declared COVID-19 a pandemic.

An epidemic refers to an uptick in the spread of a disease within a specific community. A pandemic is a global spread of a new disease.

The term is most often applied to new influenza strains, and the CDC says it’s used when viruses “are able to infect people easily and spread from person to person in an efficient and sustained way” in multiple regions. The declaration refers to the spread of a disease, rather than the severity of the illness it causes. 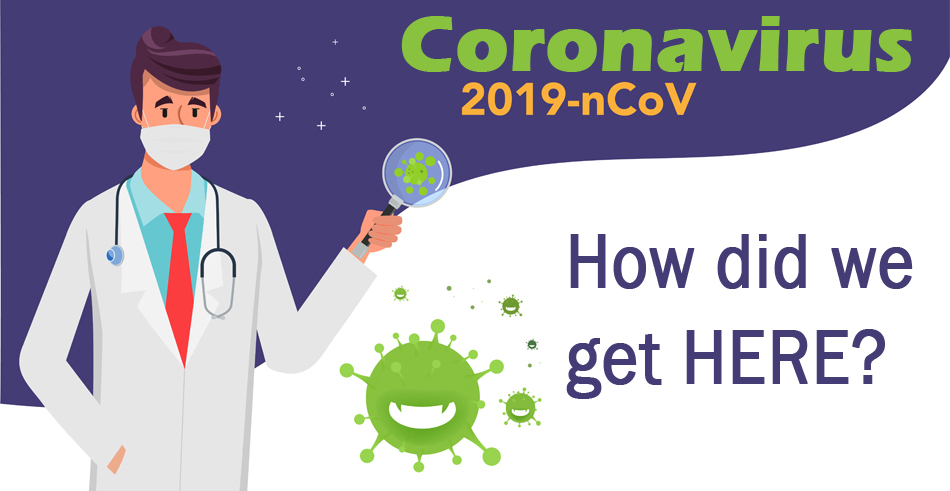 Wuhan, China, a port city of 11 million people in the central Hubei province, reports its first known virus patient.  On Dec. 16, doctors at the Central Hospital of Wuhan send samples from another patient with a persistent fever for lab testing. Those results show a SARS-like virus and on Dec. 30 Ai Fen, the head of the hospital’s ER department, posts a picture of a lab report on Chinese social media, which is re-posted and circulated by several other doctors. They’re reprimanded by local police for “spreading rumors.”

This is the first time that many within China as well as the outside world learn about the virus’ existence.

China alerts WHO to several cases of unusual pneumonia in Wuhan,Several of those infected worked at the Wuhan, Huanan Seafood Wholesale Market. The market was shut down on January 1.

China announced they had identified a new virus, named 2019-nCoV (COVID-19). The new virus is in the coronavirus family, which includes SARS and the common cold. Coronaviruses are common and spread through being in proximity to an infected person and inhaling droplets generated when they cough or sneeze, or touching a surface where these droplets land and then touching one’s face or nose. At this time there were at least 40 confirmed cases of the new virus.

China announced its first death from COVID-19 death. A 61-year-old man, who had purchased goods from the seafood market, was admitted to hospital where he died when treatment failed.

scientists in Shanghai sequences the complete genome of the virus and publishes it on virological.org, an online discussion forum for epidemiologists. Researchers around the world are now able to identify the virus in patients and infections are quickly found outside of Wuhan.

Thailand confirms its first case on Jan. 13 and three days later one appears in Japan. Cases are reported in Beijing and the southern Guangdong province.  Authorities in the United States, Nepal, France, Australia, Malaysia, Singapore, South Korea, Vietnam and Taiwan confirmed cases over the following days.

China reported a third death and more than 200 infections, with cases also reported outside Hubei province including in the capital Beijing, Shanghai and Shenzhen. Asian countries ramped up measures to block the spread of the virus, introducing mandatory screenings at airports of all arrivals from high-risk areas of China.  South Korea now has 204 cases and at least 2 deaths.

the death toll in China jumped to 17 with more than 550 infections. Many European airports stepped up checks on flights from Wuhan.

a day before the country’s week long Lunar New Year holiday, Wuhan is placed under lock down. The quarantine is expanded quickly to cities surrounding Wuhan. Eventually, Hubei province and 60 million people are quarantined. Air and rail departures were suspended.

China had 830 infections and 26 deaths.  Shanghai Disneyland shut down and other cities announced the closure of entertainment venues. Beijing said a section of the Great Wall and other famous landmarks would also be closed. Hong Kong meanwhile declared a virus emergency, cancelled Lunar New Year celebrations and restricted links to Mainland China.

there were total of about 80,000 confirmed infection cases reported globally and at least 2,800 related deaths. 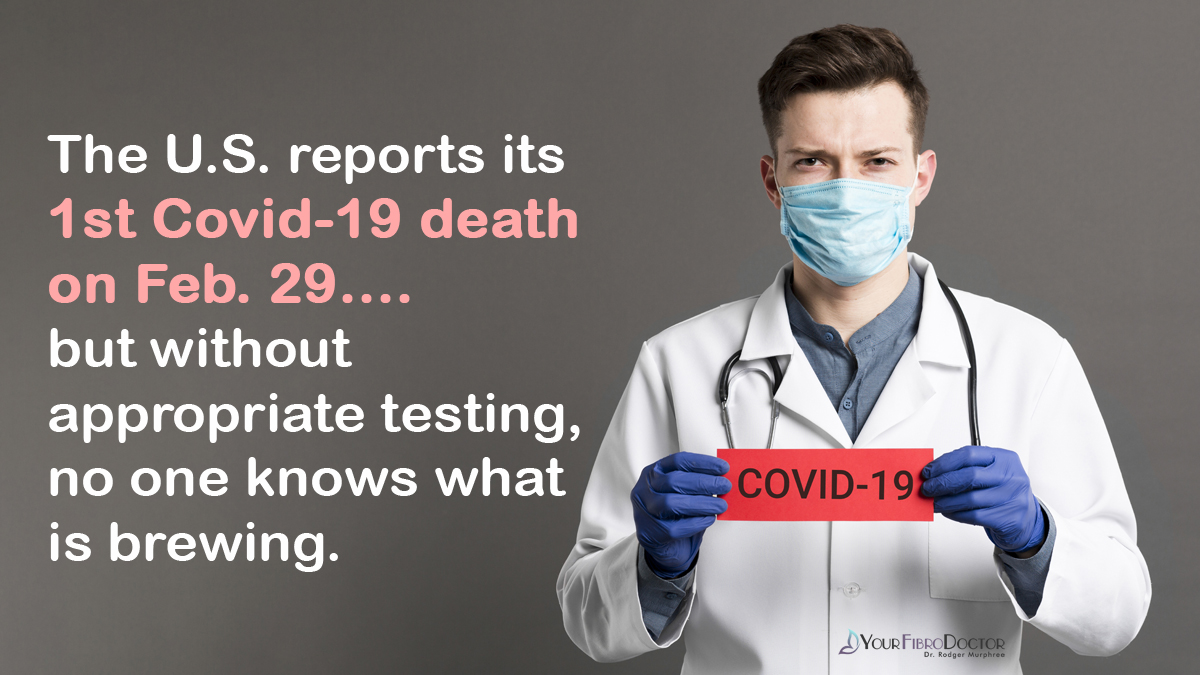 Japan confirms its first death from the virus. And the virus spreads throughout Asia and the world at large. South Korea report its highest daily number of confirmed cases yet, 813, bringing the country’s total to 3,150 with 17 deaths.

Eventually, in India, the government orders a nationwide lockdown — the largest in the world at more than 1.3 billion people — as it races to stop the virus from taking hold among its vulnerable population.

the coronavirus had killed nearly 3,500 people and infected another 102,000 people across more than 90 countries.

Italy becomes the epicenter of Europe’s outbreak. The northern part of the country, the Lombardy region is particularly hard hit. Italian towns are placed under quarantine on Feb. 22 and restrictions grow to encompass the whole nation on March 9.

The virus spreads to Spain and deaths grow to the second highest in the world. A state of emergency is declared on March 14. As of today Spain has 117,710 cases and over 10,935 deaths.

In mid-March, The World Health Organization officially declares a pandemic.

According to the World Health Organization, coronavirus has now infected over 135,000 people and killed nearly 5,000. The official death toll in Iran is around 429, but many fear the actual number is far higher. Satellite pictures of mass graves are shared on the Internet. Italy, Spain and France experienced the highest daily jump in the number of coronavirus-related deaths. Italy’s health ministry reports a total of 1,809 people have died as of 6 p.m. local time on March 15; the death toll jumped from the 1,441 fatalities reported a day earlier. Germany seals off its border and reports a total of 5,813 confirmed cases of coronavirus and 13 deaths. 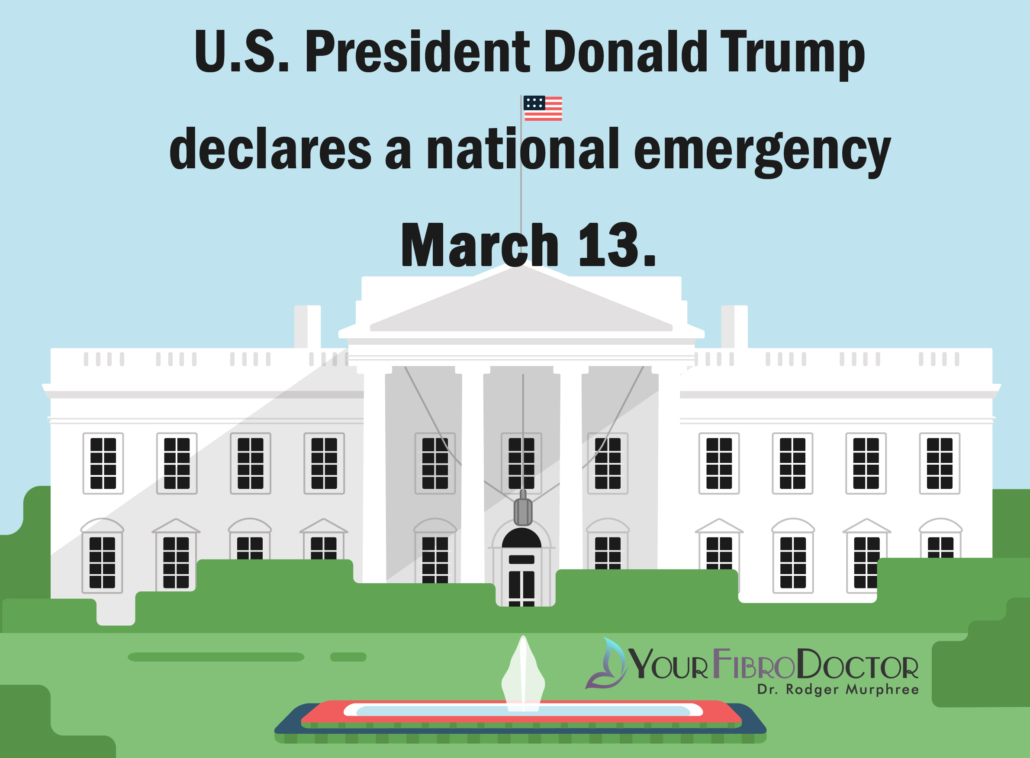 The U.S. Centers for Disease Control and Prevention said that it is urging organizers to cancel or postpone in-person events with 50 people or more in attendance throughout the United States.

In the United States, the number of reported coronavirus infections is over 2,000 with at least 49 deaths. Congress’s in-house doctor privately tells Capitol Hill staffers that he expects 70 to 150 million people in the U.S. will contract the coronavirus.

Six states announce plans to close all public schools: Oregon, Ohio, Michigan, Maryland, Kentucky and New Mexico. Schools in Houston, Texas, and near Seattle are also closing. Almost 5 million children are being impacted by the closings.

All major sporting events in the United States are halted. The NCAA has canceled for the first time ever the men and women’s college basketball tournaments known as March Madness.

Other states and cities throughout the U.S. follow suite and begin enforcing stay at home measures.

By March 26 the United States has at least 81,321 people are known to have been infected with the coronavirus, including more than 1,000 deaths — more cases than China, Italy or any other country. March 31 the top government scientists battling the coronavirus estimated that the deadly pathogen could kill 100,000 to 240,000 Americans. 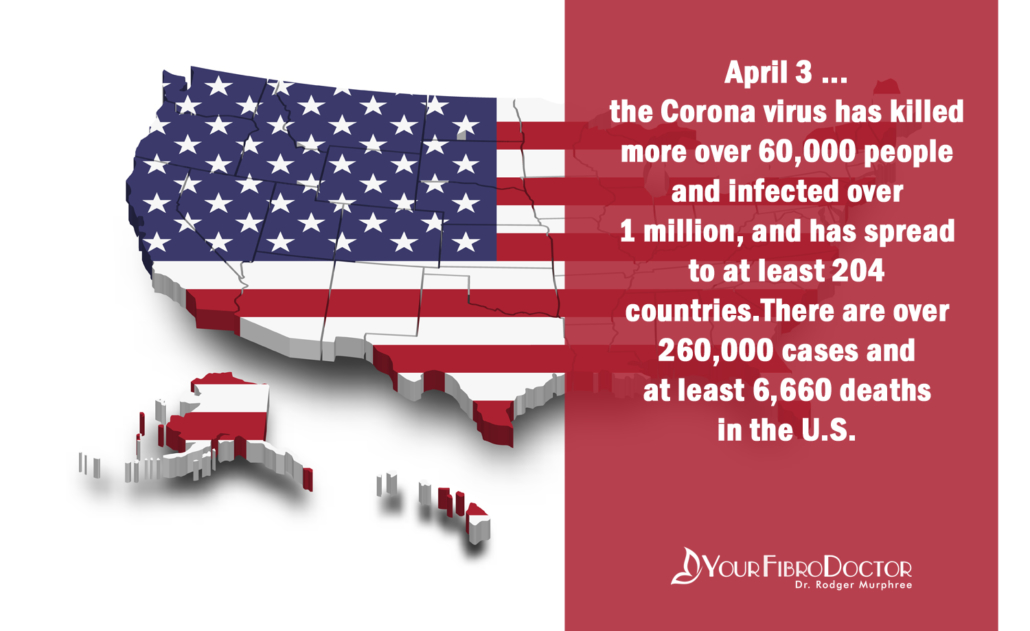 As Europe and the U.S. struggle to “flatten the curve” and the virus’s spread, Asian cities are beginning to see new cases from travelers arriving from the west.

Self quarantine or worse lockdown restrictions will last well into the summer. Once the virus infection rate goes down, it WON’T mean it’s gone!

The chart below shows only a fraction of people in states with a growing COVID-19 caseload, have been tested.

This begs the question-How many people REALLY have the virus, have had the virus, or have died from the Corona virus? If you’ve ever been to NYC, you know that containing a HIGHLY contagious virus that is easily spread by droplets that may be able to last for days on subways, taxi seats, counter tops, handrails, and the like, is next to impossible-especially since “It” was assuredly already part of daily life in NYC and other transient cities for weeks before testing was implemented. 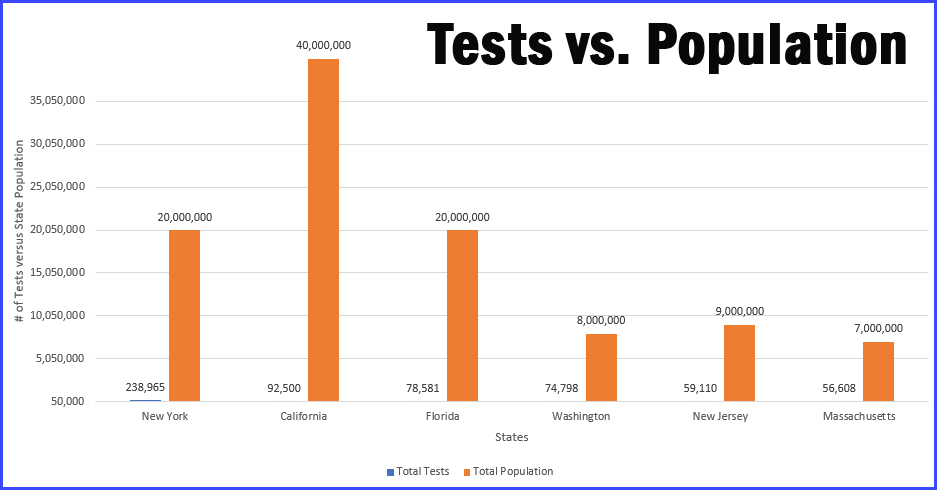 Epidemiologists say that even after countries contain their first outbreaks, the virus is likely to return in later waves, as the flu pandemic of 1918 did.

A sizable group of infected people are asymptomatic and show no signs at all. These “carriers” are likely to continue to spread the virus. This raises the concern that the epidemic will evade control for months to come.

The Good News….yes there is some good news! And it will get better!!!

The race is on to find a “cure.” Scientist around the world are pooling their resources and sharing their talents to find what is and isn’t working. I believe we will find the correct protocol in the next few months!

WE ARE HOPEFULLY LEARNING WE ALL NEED TO LEARN TO LIVE AND PLAY NICE WITH ONE ANOTHER. WE ARE IN THIS TOGETHER.  NO COUNTRY IS AN ISLAND.

The U.S. Food and Drug Administration (FDA), has announced that a new test by Abbott Medical Labs will be able to deliver results in as little as five minutes.

“This is going to be the fastest molecular point-of-care test to date,” said John Frels, Ph.D., Abbott’s vice president of research and development, in an interview with ABC News. “It generates a positive result in 5 minutes and negative results in 13 minutes.” An “at home test” may soon be available.

The US Food and Drug Administration (FDA) approved limited emergency use for chloroquine and hydroxychloroquine as a treatment for COVID-19.

President Trump, announced two weeks ago that antimalarial drugs, chloroquine and hydroxychloroquine/Plaquenil, were approved by the FDA to be tested as a treatment for COVID-19.

Based on promising results in France, Chloroquine is being tested in various clinical trials conducted by government agencies and academic institutions around the world. It’s too soon to know if these drugs are part of the answer. They have some potentially serious side effects. However, when faced with being placed on a ventilator, or worse death, these drugs may provide the only hope-for now at least.

Favilavir, is the first approved Coronavirus drug in China

The National Medical Products Administration of China has approved the use of Favilavir, an anti-viral drug, as a treatment for coronavirus. The drug has reportedly shown efficacy in treating the disease with minimal side effects in a clinical trial involving 70 patients. The clinical trial is being conducted in Shenzhen, Guangdong province. Other trials are underway in China and other countries.

For Now Here Is What I Recommend

Self-quarantine restrictions and preventative hygiene have been shown to slow the progression of the corona virus.

–> HERE ARE THE ONES I RECOMMEND

If you have fibromyalgia this is the time to get healthy! Here is the Wednesday Night Fibromyalgia Live Q&A From April 2nd

This Is Getting Serious