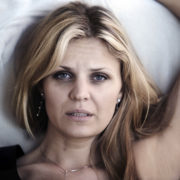 As the COVID-19 pandemic sweeps the globe bringing uncertainty, fear, loss, isolation, and hardship, individuals find themselves in a time of collective mental distraught and trauma.

More than 42% of people surveyed by the US Census Bureau in December reported symptoms of anxiety or depression in December, an increase from 11% the previous year. Data from other surveys suggest that the picture is similar worldwide (see ‘COVID’s mental stress’).

The stress of COVID is having a detrimental impact on society. Anxiety and depression were already at record levels before the pandemic but mental strain of the Virus, lockdowns, isolation, and fear have fueled the flames of stress and despair.

In this blog I’d like to share information on how natural over the counter supplements can help counter the effects of stress, anxiety and depression. 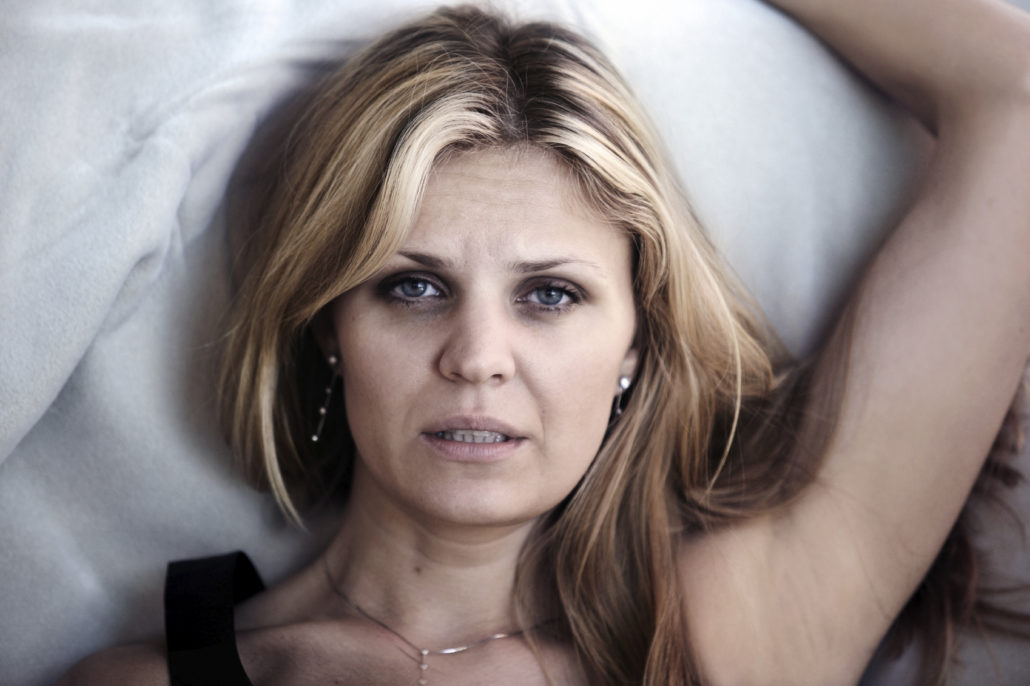 Traditional And Natural Approaches For Anxiety and Depression

Psychiatric medications are among the most widely prescribed and best-selling class of drugs in the United States. In 2010 (last year on record), Americans spent $11.6 billion on antidepressants, according to IMS Health, which tracks prescription drug sales.

By 2014, about one in every eight Americans over the age of twelve take antidepressants on a regular basis, this according to a report released from the U.S. Centers for Disease Control and Prevention.

The researchers noted “one-fourth of all people [surveyed] who took antidepressants over the past month reported having taken them for ten years or more.”

The number of patients taking antidepressants continues to rise, despite a study published in Frontiers in Psychiatry concludes that “antidepressants are largely ineffective and potentially harmful.” The researcher, Michael P. Hengartner at the Zurich University of Applied Sciences in Switzerland, conducted a thorough literature review focusing on randomized, controlled trials—the gold standard of evidence-based recommendation.

According to Hengartner, research funded by the National Institute of Mental Health found no differences between antidepressant efficacy and placebo—and this was despite the research design, using randomized controlled trials, the gold-standard method. Numerous studies now show that between 19% and 70% of those taking antidepressant medications do just as well by taking a placebo or sugar pill.

While patients are attempting to correct their mood disorders with prescription drugs that may or may not be more effective than a sugar pill, all of these drugs have potential –sometimes serious – side effects. Prozac alone has been associated with over 1,734 suicide deaths and over 28 000 adverse reactions. 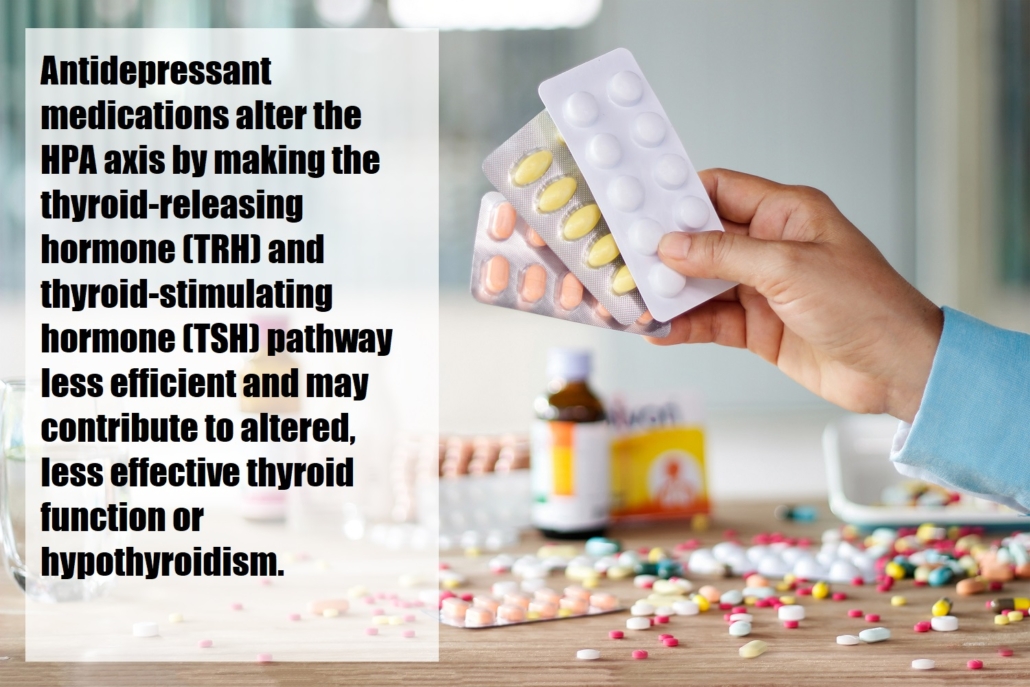 Antidepressants also divert the amino acid L-tyrosine, the precursor for the brain chemicals dopamine and norepinephrine, from converting into the thyroid hormone T4. This is a bit ironic, since low thyroid function is a major cause of depression.

DON’T STOP ANY MEDICATIONS WITHOUT CONSULTING YOUR PHYSICIAN.

Benzodiazepines are addictive, and patients build up a tolerance so that the drugs eventually lose effectiveness as a sleep aid. Addiction may occur in as little as two weeks.

The big problem with these medications is the potential side effects, many of which mirror the symptoms of fibromyalgia. And they don’t promote deep, restorative sleep, so they are definitely not worth the risk. Benzodiazepines depress the central nervous system and act on the neurotransmitter GABA, a calming chemical that transmits messages from one cell to another. So directly or indirectly, these drugs influence almost every brain function and most other bodily systems, including functions of the nervous, neuromuscular, endocrine, and gastrointestinal systems. It’s no wonder their side effects are so severe.

Prescribing benzodiazepines for poor sleep, restless leg syndrome, sleep apnea, and other fibro-related conditions should be considered malpractice. These drugs are dangerous, addictive, and a poor choice when there are other drugs and natural approaches, that are as effective without the risky side effects.

The crippling side effects and addictive nature of these drugs have been known for at least forty years, yet doctors continue to prescribe them at an ever-increasing rate, especially for seniors.

A mouth-dropping 50 percent of all women sixty and older will be prescribed a benzodiazepine drug. And since addiction often occurs within four weeks of starting these drugs, the majority of these folks are now dependent on them.

Tolerance to the hypnotic (sleep) effects of these drugs may occur within one week. Symptoms of tolerance are identical to drug-withdrawal symptoms and may include anxiety, panic, severe insomnia, muscle pain and stiffness, depression, suicidal thoughts, rage, heart and lung problems, and agoraphobia (extreme fear of leaving home or being in public or crowded spaces).

Tragically, only 10 to 30 percent of people are able to successfully stop taking these drugs. The rest are addicted for life.

WARNING: DO NOT STOP TAKING ANY OF YOUR PRESCRIPTION MEDICATIONS WITHOUT CONSULTING YOUR DOCTOR

Balance Your Neurotransmitters To Feel Better

Neurotransmitters are brain chemicals that help relay electrical messages from one nerve cell to another. They are produced from amino acids (which we get from protein foods); vitamins B6, B3, and C; and the mineral magnesium. Amino acids, then, are the raw nutrients needed to manufacture the neurotransmitters.

Dopamine and norepinephrine are synthesized from the amino acid phenylalanine. They increase mental and physical alertness, reduce fatigue, and elevate mood.

Epinephrine, made in the brain as well as the adrenal glands, is also synthesized from the amino acid phenylalanine and helps increase energy and boost mental clarity. Low levels cause depression and fatigue. Prescription medications like Wellbutrin and Effexor attempt to boost the brain’s levels.

Neurotransmitters that cause excitatory and stimulating reactions are known as catecholamines. These include epinephrine and norepinephrine (adrenaline). Inhibitory or relaxing neurotransmitters include serotonin and gamma-aminobutyric acid (GABA).

Amino acids are involved in every bodily function. They are the raw materials for the reproduction and growth of every cell. They are in every bone, organ (including the brain), muscle, and most every hormone.

Individual amino acids are joined together in sequential chains to form proteins. Protein, the body’s building material, is essential to every cell and makes up our muscles, hair, bones, collagen, and connective tissue. Enzymes are protein molecules that coordinate thousands of chemical reactions taking place in the body. They are essential for breaking down and digesting our food.

Amino acids can occur in two forms: D-form and L-form, which are mirror images of one another. The L-form is available in the foods we eat and is considered the more absorbable. D-forms can be created by bacteria, tissue catabolism, or synthetic means.

Most D-form amino acids are not available for protein synthesis and can be detrimental to normal enzyme functions. DL-phenylalanine, however, is the exception. DL-phenylalanine is good for you, inhibiting the breakdown of endorphins and enkephalin, which elevate mood and help block pain. These are the same chemicals released during strenuous exercise to create the “runner’s high.”

HOW TO SUPPLEMENT WITH AMINO ACIDS

Always use the L forms of an amino acid when supplementing. Single amino acids  are available over the counter as nutritional supplements. They can be taken as a blend to shore up any nutritional deficiencies or taken individually in order to produce specific reactions.

It’s best to take single amino acids on an empty stomach, 30 minutes before or 1 and a half hour after eating. Individuals with malabsorption syndrome, irritable bowel, leaky gut, and chronic illnesses are wise to take an amino acid blend in addition to any single amino acids they may be taking.

My patients if needed combine the appropriate natural amino acids with their prescription medications. If you have any concerns, always consult your doctor.

NEVER STOP taking your prescription medications without consulting your physician.

I’ve developed a brain function questionnaire to help you determine which amino acids you need. You can use my Brain Function Questionnaire to see which if any amino acids or neurotransmitters you’re low in.  –> https://yourfibrodoctor.com/brain-function/ 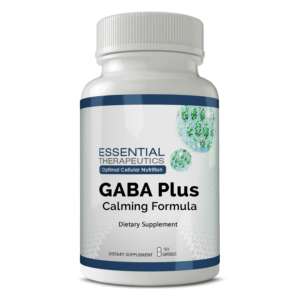 I’ve been following Dr. Murphy’s work regarding fibromyalgia for years but he didn’t have products at the time. Just received this product yesterday and took it last night. I honestly didn’t think it would work. I am on anxiety meds now and been on them for years. I have tried to get off of them for years. I am praying this product is going to be one. It did calm me down and it was within 15 to 20 minutes and I didn’t take my anxiety meds last night. I feel like God has answered my prayers through Dr.Murphree and his products. This works!

This is the only product I have found that really does calm the brain. When you are lying in bed and your mind is racing, stuck in that stressful loop, this product is the answer!

This is one of my favorite products because it has calmed my racing mind due to a reaction from a medication I took years ago. I have been able to increase doses on high stress days without any side affects. It helps me with my anxiety and ultimately with blood pressure. Would highly recommend it.

GABA Plus-is an all-natural blend of calming nutrients which work within minutes to calm tension, stress and anxiety. It won’t make you feel dopey, sleepy or tired. It can be safely combined with other medications.

GABA Plus provides essential synergistic nutrients to improve moods, stress and anxiety.  GABA, is the major inhibitory or calming  neurotransmitter. The amino acids taurine and L-glycine work with GABA to provide the synergistic ingredients for quick, effective calming action. The nutrient inositol helps increase the release of the calming neurotransmitter serotonin. 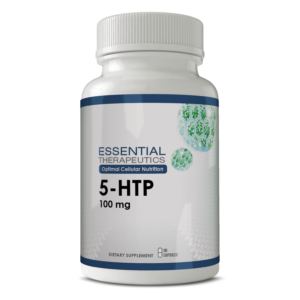 “5 HTP has been a game changer for me! I am elated about finally being able to get restorative sleep!!! I feel refreshed and more energetic upon waking up every morning! I have been taking the Fibro Jump Start pack for about three months This vitamin and supplement protocol is truly a blessing to me! Thank you Dr. Murphree!”

P.S. Need To Lose Those Quarantine 15 Extra Pounds? (Or more)

If you’ve gained some unwanted weight over the last year or simply ready to shed some unhealthy extra pounds check out the 2Transform Anti-Inflammatory Weight Loss Diet.

My patients typically lose half a pound a day on this revolutionary diet. The diet and membership support is designed so you can get professional guidance without an in clinic visit. Clients throughout the United States are using the 2Transformhealth diet with incredible results.

My Answer May Surprise You. It Surprises Most.

Do You Get The Fidgets?
Scroll to top