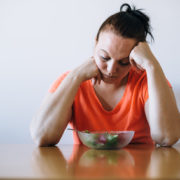 Did you know that sixty percent of yearly weight gain occurs during the year-end holiday period-from Thanksgiving to New Year’s. There is typically a small weight loss reset after the holidays but not enough to counter the extra pound(s) put on during the last 6 weeks of the year.

60% Of Weight Gain Occurs During The Last 6 Weeks Of The Year!

We’ve all heard that our metabolism (our ability to turn calories from our diet into energy) is reduced as we age. Supposedly this is why most people gain weight over their lifetime.

But is this true?

A new international study counters the common belief that our metabolism inevitably declines during our adult lives. Well, not until we’re in our 60s, anyway.

Researchers discovered that energy expenditures during these middle decades – our 20s, 30s, 40s and 50s — were the most stable. Even during pregnancy, a woman’s calorie needs were no more or less than expected given her added bulk as the baby grows.

The data suggest that our metabolisms don’t really start to decline again until after age 60. The slowdown is gradual, only 0.7% a year. A person in their 90s needs 26% fewer calories each day than someone in midlife.

Lost muscle mass as we get older may be partly to blame, the researchers say, since muscle burns more calories than fat.

Researchers found that metabolism peaks around age 1, when babies burn calories 50 percent faster than adults, and then gradually declines roughly 3 percent a year until around age 20. From there, metabolism plateaus until about age 60, when it starts to slowly decline again, by less than 1 percent annually, according to findings published Thursday in the journal Science.

Statistics show that the average weight gain for North Americans is about 1.3 pounds per year. At first glance this fact tends to support decreased metabolism as we age.

However, for the majority of folks it’s not a reduced metabolism that causes weight gain, it’s the holidays!

Excess calories, especially starches, sugars, and simple carbohydrates not only cause weight gain but also contribute to inflammation and increased risk for numerous diseases.

In recent years, scientists have looked at fat cells and their surrounding cells not just as yellow blobs that make our clothes too tight, but more as an organ, or neighboring bodies of organic fatty tissue.

The fat cells, or “adipocytes,” within this tissue have several functions, such as pumping out vital energy-producing fatty acids, storing fatty acids for future use, and secreting hormones that regulate body weight. But unfortunately, among the obese, they’re a source of unwanted disease triggering toxins and inflammatory chemicals.

Researchers are learning that fat is much more than that. Fat also produces hormone-like compounds called cytokines that increase inflammation. This is especially true of visceral fat.

If you’re more than 20% overweight you increase your risk of death from all causes by 250%!!!

Being overweight is clearly linked with an increased risk of many cancers, including cancers of the:

According to leading researchers, 90% of all diabetes, 80% of heart disease, and 60% of cancers are preventable with healthier lifestyles and normal body weights.

Being Overweight By 20 lbs. Increases Your Risk Of Developing Numerous Diseases:

Cancer-Breast (in women past menopause), Colon, Rectal, Uterine, Esophageal, Kidney, Pancreatic.
There are numerous diets out there but most fail to work and those that do often require months before reaching your goal.

Over a 24-month period, Weight Watchers members who regularly weighed in at meetings and stayed on the plan lost an average 5 1/2 pounds per year, or slightly less than 1/2 pound per month.

Obviously it will take a long time to lose 20 or more pounds on the Weight Watcher’s diet.

You can lose half a pound a DAY on the 2Transform Diet without ever being hungry, exercising, buying special foods, or shakes.
Lose 15-20 pounds in a month.

What Is Fibromyalgia? And How Do You Overcome It…
Scroll to top