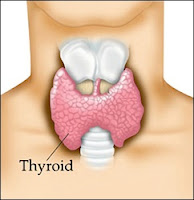 A majority of my fibro and CFS patient’s complain of low thyroid symptoms. They relate that they, and sometimes even their doctors, suspected a thyroid problem only to have their blood work come back “normal”. Most physician’s won’t recommend thyroid replacement therapy if the blood tests come back “normal”. Most don’t know or choose not to accept the well-documented studies that show a low body temperature is indicative of low thyroid function and perhaps true hypothyroidism.
And most doctors don’t realize that blood tests for low or hypothyroidism is notoriously inaccurate.
Do you have a number of these symptoms, associated with hypothyroidism- fatigue, headaches, dry skin, swelling, weight gain, cold hands and feet, poor memory, brain fog, hair loss, hoarseness, nervousness, low sex drive, brittle nails, constipation, poor immune function, chronic sinus infections, high cholesterol, high or low blood pressure, anxiety, depression, joint and or muscle pain, and burning or tingling sensations in the hands or feet? Reads like the symptoms of fibromyalgia and or CFS doesn’t it?
Ok, how many symptoms did you have? Several I imagine. So if you have most of the symptoms associated with hypothyroidism, why doesn’t your blood test show that you in fact do have hypothyroidism? Good question.
One major reason is that most doctors don’t do the complete tests to uncover hypothyroidism, especially when it comes to those with fibromyalgia and or CFS.
You may have a common autoimmune disease known as Hashimoto’s thyroiditis. It may be the most common thyroid disease, especially with women with fibromyalgia.
What is Hashimoto’s Thyroiditis – Hashimoto’s Thyroiditis is an autoimmune thyroid disease where the immune system immune system aggressively attacks your thyroid gland-attempting to destroy your gland as if it’s some dangerous enemy. It can cause nodules or lumps in the thyroid. However most of the time there is no physical change in the appearance of your thyroid.

It typically starts out silently, slowly, but soon enough inflammation, low thyroid function and gradual destruction of your thyroid gland begins-symptoms like fatigue, weight gain, or other symptoms associated with low thyroid function, become common. Unfortunately typical blood tests (TSH, T4 blood levels) won’t uncover this disease! Symptoms from thyroiditis can go on for years and years. Doctors may continue to suspect from all your symptoms you have hypothyroidism but since your blood work always comes back “normal,” you must just be depressed or lazy or….here take an antidepressant.
Year after year your doctor treats the symptoms of the uncovered Hashimoto’s disease with drug after drug-antidepressants for your depression, cholesterol medicine, high blood pressure medicine, stimulant drugs for your fatigue…it goes on and on. Why not treat the CAUSE of this symptoms-the Hashimoto’s?
What are the symptoms of Hashimoto’s thyroiditis? Again for most, the symptoms are silent–at least in the early stages. But eventually, you start to notice the same symptoms of hypothyroid, including poor stamina, easy fatigue, feeling cold, gaining weight, dry hair and skin, constipation, etc.
There are special blood tests to uncover Hashimoto’s thyroiditis, which I routinely perform on ALL my patients-why would you want to miss such a valuable piece of information? If your fortunate enough to get a doctor who isn’t blindly following the herd, and does actually have some “smarts” and runs special thyroid tests to uncover Hashimoto’s, they’ll typically take a wait and see approach to a positive test.
This ridiculous! “Miss Jones you have the beginnings of Hashimoto’s thyroiditis but since we can’t treat it affectively with prescription drugs, or at least not until your thyroid has been destroyed from the Hashimoto’s disease.”
“Doctor, how will you know when my thyroid has been destroyed.”
“Your thyroid stimulating hormone (TSH) level will finally be elevated and we will then be able to prescribe a synthetic thyroid hormone like Synthroid or Levothyroxine, which you’ll need to stay on for the rest of your life.
Allowing the attack to continue on your thyroid until your TSH is elevated is crazy-not only last for years, but cause all sorts of problems along the way of its destruction, including years and years of poor health. Instead, why not just stop the attack and all the consequences?
Why because traditional medicine doesn’t have a drug to stop the attack. Fortunately there natural over the counter remedies and protocols that will in fact stop the destruction and correct the altered thyroid function.
Listen if you have symptoms similar to the ones discussed above do yourself a favor find a doctor who’ll do more than order the typical run of the mill tests. You know what I’m talking about, the same tests your doctors runs every year and then reports your labs look great it is just your fibromyalgia that is the problem.
The real problem is you’ve got a doctor or doctors who are content to do the same tests, ask the same questions, and prescribe the same recommendations, and you get worse every year. WHAT YOU NEED is a detective, a health professional who based on his or her experience knows that the only way to reverse a complicated illness like fibromyalgia is to order the uncommon tests (no one with fibromyalgia is common), ask the questions not asked, and pursue every health clue until you are know the TRUE cause of the symptoms-then start treating the CAUSE not the symptoms.
If you suspect you have Hashimoto’s thyroiditis or a low thyroid function and can’t get your doctor to help you then please consider taking the time to find a doctor who will listen to you and order the right tests.
I’ve been fortunate enough to have uncovered hundreds of missed Hashimoto’s thyroiditis cases and have helped spare these patients of years of misery. There are ways to correct Hashimoto’s thyroiditis short of letting your thyroid burn out and health become shattered.
I’ve helped thousands reverse their fibromyalgia and get their life back. Are you next?
Phone and in clinic new patient consults available 205-879-2383
0 0 Dr. Rodger Murphree & Team https://yourfibrodoctor.com/wp-content/uploads/2018/08/YOUR-FIBRO-DOCTOR-LOGO-left.png Dr. Rodger Murphree & Team2012-08-17 17:00:002018-08-08 15:26:07Most Common Thyroid Disease: Especially For Women With Fibromyalgia
11 replies