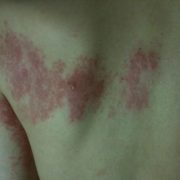 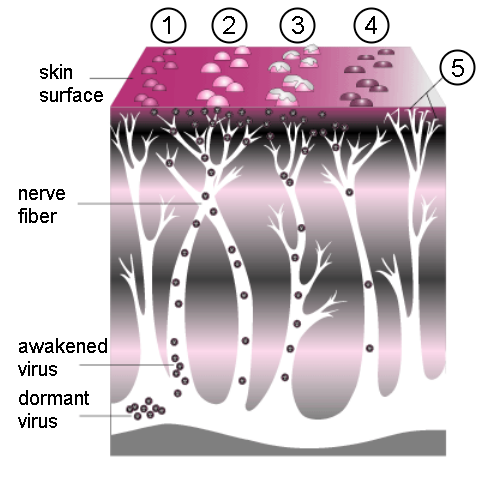 Shingles is a viral infection that causes a painful rash. Although shingles can occur anywhere on your body, it most often appears as a single stripe of blisters that wraps around either the left or the right side of your torso.

Shingles is caused by the varicella-zoster virus — the same virus that causes chickenpox. After you’ve had chickenpox, the virus lies inactive in nerve tissue near your spinal cord and brain. Years later, the virus may reactivate as shingles. One of the most clinically relevant properties of varicella virus is the ability to establish a latent infection.

This means that the virus can lay dormant in the body, becoming “reactivated” under certain conditions, and manifest symptoms long after the initial infection. This reactivation can occur as a result of local injury, or systemic factors such as emotional stress, fever, trauma, chronic illness or lowered immune function. In fact the combination of stress, which lowers a person’s immune system, and resulting low immune system the catalyst for the majority of shingles cases.

Typically, the first and the most common symptom of shingles is pain, which presents in approximately 75% of people who go on to develop a rash The pain is sometimes described as a burning, throbbing, or stabbing sensation that is localized to the area of the skin that will later be affected by the rash. During this time, which is also known as the “prodromal period”, patients may also experience headache, malaise, earache, sensitivity to light, and fever. These symptoms may appear up to 5 days before the rash.

Typically, after prodromal symptoms occur, a rash will develop. However, in some people, a rash may appear before they experience pain. In addition, some patients will have pain, but will not develop a rash; this is called “zoster sine herpetica.” Shingles attacks nerve cells.

The lesions caused by shingles have a characteristic location and distribution: they may be limited to one side of the body and are localized to a “strip” of skin, also known as a dermatome, which represents the skin area that is served by the nerves of a single ganglion. In about 20% of patients, adjacent dermatomes can be affected. The most commonly affected areas are on the side of the trunk around the waistline and the second most common is the face around the eye/ forehead. The skin lesions typically take 2 to 4 weeks, or sometimes even longer, to heal and they may cause permanent scarring or skin pigmentation changes.

Are you joining us on the call tonight? Need the call-in Info?

The standard treatment for both shingles and herpes is antiviral medication. The main antiviral medications used for shingles are acyclovir (Zovirax®), famciclovir (Famvir®), and valacyclovir (Valtrex®). All three medications can be taken orally and reduce pain and speed healing of the lesions; though famciclovir and valacyclovir are often preferred because they require less frequent dosing (three times per day as opposed to five for acyclovir).

The utility of acyclovir more than 72 hours after the lesions appear is unknown in otherwise healthy individuals.

Over The Counter Topical Cream

Another treatment option is to use local creams that contain the compound capsaicin (Zostrix®). Capsaicin is the ingredient in peppers that generates the sensation of “heat” in the mouth. When formulated into a cream or ointment, it can be applied to areas of the body that are still painful after the shingles blisters are gone to reduce pain. When applied, capsaicin creams generate a mild “burning” sensation. Capsaicin causes the release of a neurotransmitter (Substance P) from nerve cells, and its repeated application depletes the nerve stores of the compound, reducing pain transmission.

Available over the counter at most drug and health food stores. Follow the label and be careful, this stuff can burn; a little goes a long way. 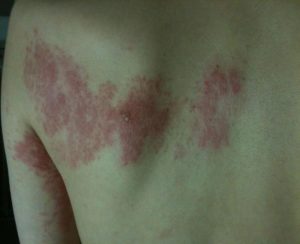 Over The Counter Remedy

Cimetidine (Tagamet®) is a medication commonly used for treating acid reflux (GERD). It inhibits the production of stomach acid by blocking the signaling pathway for histamine. Histamine signaling modulates the immune response to some viruses as well, and researchers have shown that oral administration of cimetidine significantly accelerates the healing of skin lesions and provides pain relief in adults with shingles.

There are numerous case studies demonstrating that cimetidine or Tagamet may reduce the severity and duration of symptoms of both shingles and herpes outbreaks. I recommend taking 200mg-400mg for times times a day. Take on an empty stomach. Take along with L-Lysine-see below. Available over the counter at any drug store.

The herpes simplex virus (including varicella) requires large amounts of the amino acid arginine to replicate properly. Lysine, another amino acid, has a similar structure to arginine and counters its effects, making it harder for the virus to replicate.

A double blind, placebo-controlled study that included participants with oral-facial or genital herpes, found that consumption of one gram of L-lysine three times per day for 6 months reduced the frequency, duration, and severity of herpes outbreaks. Other studies have also found that lysine supplementation can reduce the frequency of cold sores that occur during HSV-1 infection. Overall, lysine appears to be able to reduce the intensity and the frequency of HSV flare-ups when it is used regularly.

I recommend taking 500mg 3-4 times a day. L-Lysine can be purchased over the counter at most dug stores and health food stores.

Lemon balm (Melissa officinalis) is a form of mint used traditionally to treat numerous of ailments, including herpes outbreaks. Several laboratory experiments have shown lemon balm extracts possess a variety of antiviral activities against both HSV-1 and HSV-2. I recommend applying to lesion and along the dermatome (nerve involved) in between using capsaicin cream.  Lemon balm can be purchased over the counter at most drug and health food stores.

Lactoferrin is a protein found in both cow and human milk. It has natural antimicrobial properties and is able to help protect the body from bacterial, fungal, parasitic, and viral infections. In particular, many studies have shown that lactoferrin is able to inhibit the replication of varicella, HSV-1 and HSV-2 and also block the virus from entering cells. It can be purchased over the counter at most health food stores.

New Hot Flashes Drug Nothing New And Nothing Special