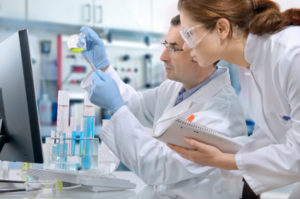 Recent research out of the United Kingdom has a lead to a new blood test that could help diagnose one of the most difficult and elusive pain conditions, fibromyalgia. This notoriously complex condition is characterized by symptoms of widespread musculoskeletal pain, poor quality sleep, fatigue, stiffness, and a list of other debilitating symptoms that worsen over time.

Many patients go years without a proper diagnosis and treatment, so if there is anything in a blood test that can help non-fibro-expert doctors diagnose and treat these patients, I am interested to see what it is and how it develops.  I have been treating fibromyalgia and chronic fatigue syndrome for almost two decades, so I know the symptoms and “extra” tests that need to be done for proper diagnosis; however, this is not common knowledge in a doctor’s office.

There is no obvious cause of fibromyalgia that we know of yet; however, I have found that 90% of my patients improve greatly when their sleep patterns are corrected, which we do not do through prescription medications but through high-dose vitamin and mineral supplementation to correct imbalances that are causing disrupted sleep and other symptoms.  We know more about the cycle of symptoms than we do about the cause, however.  For example, the patient may have severe pain, which leads to poor sleep, and poor sleep leads to increased pain and moodiness, which again impacts sleep, etc.

Unfortunately, because this is a poorly understood condition, most doctors are going to send their fibro patients out the door loaded with a variety of medications for each individual symptom that could do more harm than good.

For many years, there was even debate about whether or not this was a real disease!  Doctors were telling patients it was all in their head and promptly sending them for psych evaluations.  This, of course, only led to worsening symptoms.

The new research notes that there is no real specific diagnostic study or lab test that can confirm the diagnosis of this pain syndrome; however, there are a variety of tests we use to rule out other conditions that could be causing the symptoms.  Fibromyalgia is such a complex disorder that the only way to diagnose it is by process of elimination, which can take quite a bit of time.  So, again, if there is a blood test that can at least help point doctors in the right direction for proper diagnosis, that would be a healthy step in the right direction.

At King’s College in London, scientists are being funded by a large grant to study arthritis and other joint pain conditions.  What they have found is sending them on a track to help with the identification of fibromyalgia.

The process is going to include studying twin volunteers where only one of them has chronic widespread pain such as that found in fibro patients; then, scientists can look at the DNA biomarkers associated with the condition and determine if there is a difference between the two patients within the DNA.

There is a great deal of frustration in treating this condition for all physicians, even those of us who are experts in the field because of how complicated the list of symptoms can become.  This new research, however, will aim to help patients (and the field) in two ways:

There certainly are genetic influences in fibromyalgia, but the steps to determine this and look at the genes is extraordinarily complicated and expensive, so if these researchers can simplify the process, we are looking at a huge innovative advancement in fibromyalgia.

The King’s College team is hoping to explore all the various steps involved in the fibro genetic links and determine which ones are responsible for the condition so they can better approach their own particular study findings.  An extraordinary amount of information can come from completely understanding the biology of a condition.

Researchers will focus primarily on identifying the markers outside the DNA that are there to turn genes on and off.  This is called DNA switching and it’s very important to our health because it prevents mutations, deletions and other inappropriate processes from happening.

Fibromyalgia and Hypoglycemia
Scroll to top