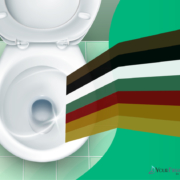 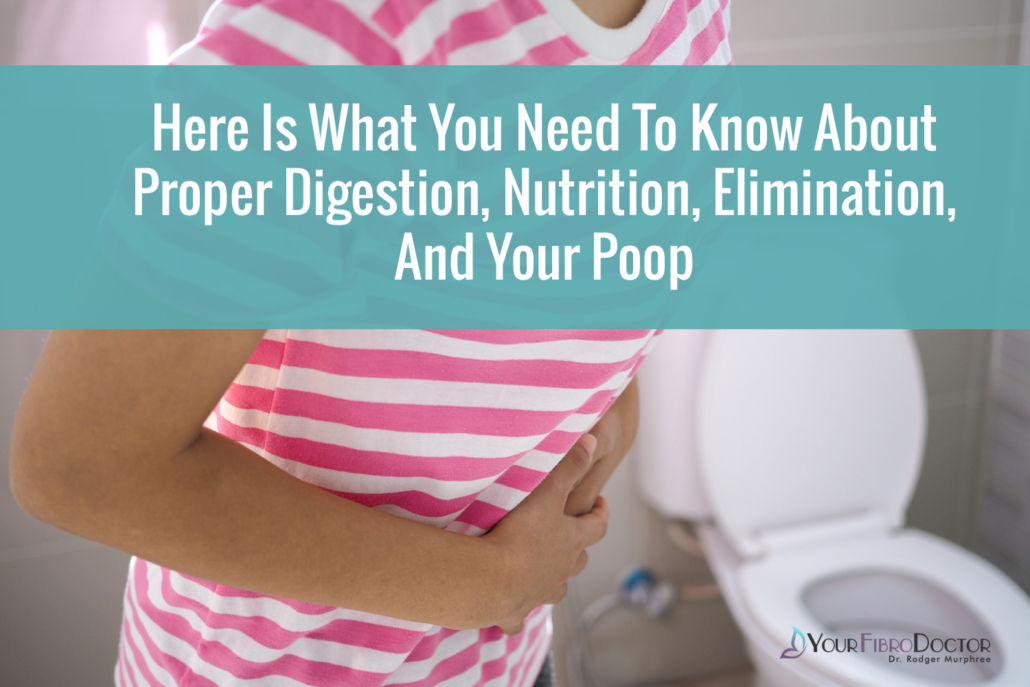 The Bristol Stool Scale is a useful reference for patients and healthcare professionals to check if the form of poop is healthy – looking at size, shape and consistency. In case you’re wondering, the chart is named after the hospital at which it was developed – The Bristol Royal Infirmary, a teaching hospital in England.

The Bristol Stool Scale depicts 7 types of stool, ranging from the hard and difficult to pass to the liquid form of diarrhea. Your poop is made up of waste products your body needs to remove, which may include undigested food (such as fiber, which cannot be digested), bacteria and salts (see more below). 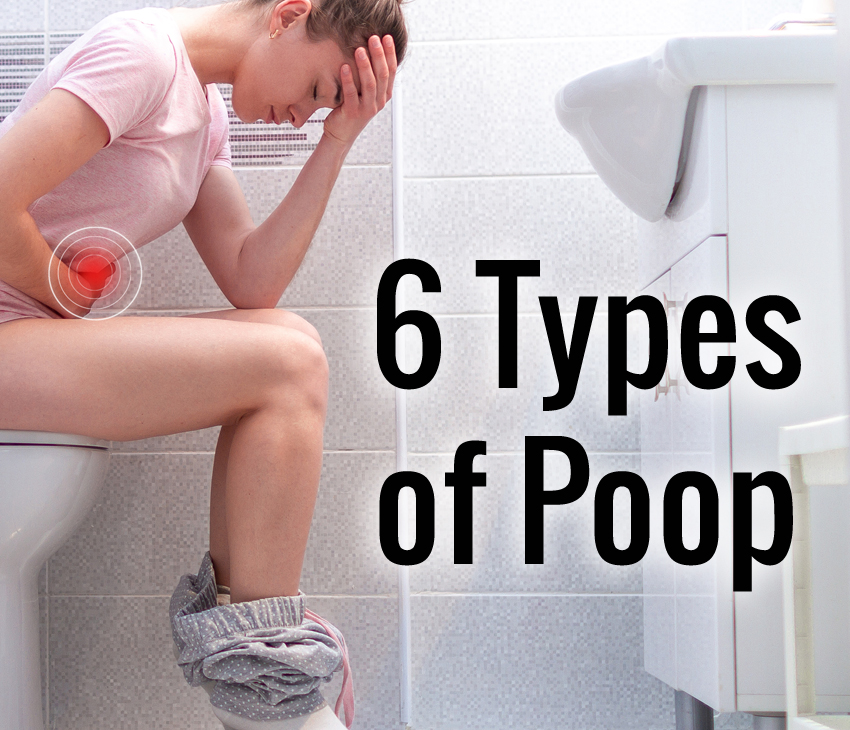 1. Signs of a Healthy Digestive System

The good news is that if you have Bristol Type 3 or 4 – your poop is normal! You’re getting enough water and fiber, and your stools are healthy.

Bristol Type 1 or 2, where the poop is hard and difficult to pass, are indicative of constipation. Often, these types of stool can be painful to pass. Short-term constipation is normally not a concern, but if you’ve been experiencing it for weeks or even months, it’s time to see a gastroenterologist to get checked out.

Constipation can be an indicator of the following conditions: A sedentary lifestyle, a diet lacking in important nutrients, mal-absorption, low thyroid, side effects of certain meds, or simply not drinking enough plain water.

Bristol Types 5 through 7 are consistent with diarrhea. Type 5 suggests that a lack of fiber is the main problem, while 6 and 7 suggest an inflammatory process. When there’s too much water but not enough fiber in your stool, it causes your poop to become too soft – usually, the fiber in your poop soaks up the water. 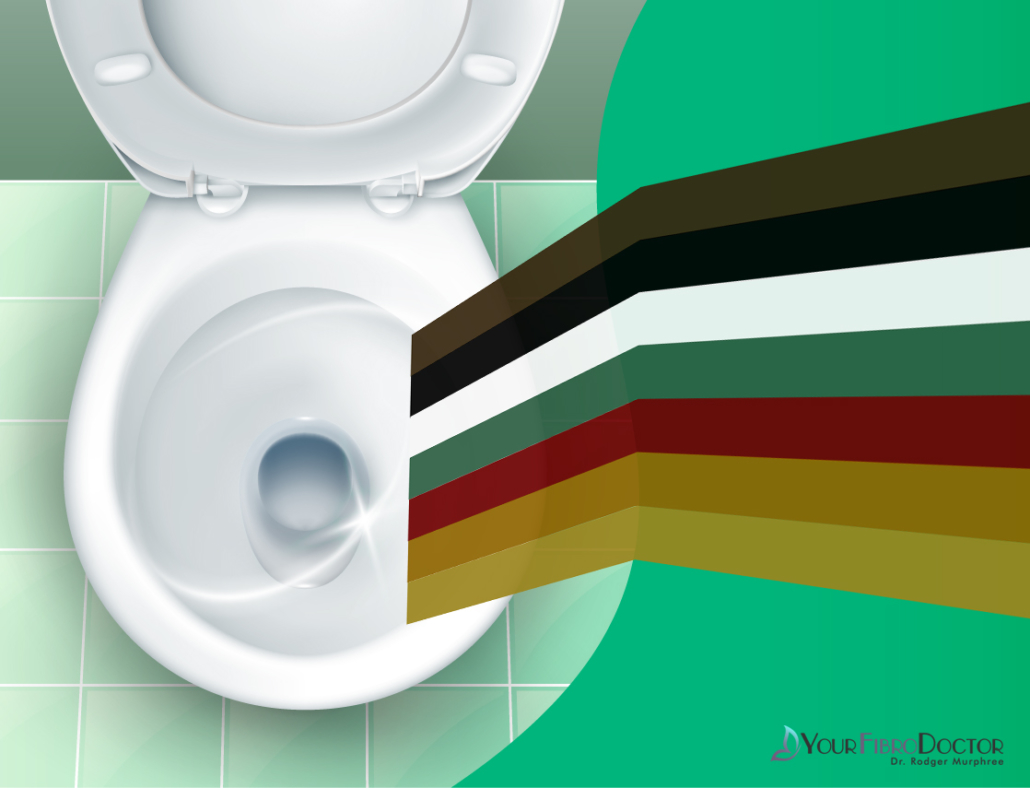 The color of adult poop can also reveal a lot about your health:

Dark brown – A healthy color caused by bilirubin – a pigment released by the breakdown of old red blood cells.

Black – Iron supplements and certain foods and medications can cause black stools, but a black, sticky, tar-like appearance may be due to gastrointestinal bleeding.

White – A lack of bile caused by issues with the gallbladder, liver or pancreas can cause pale grey or white stools.

Green – Certain plant foods can cause your poop to turn green. Green poop can also be due to too much bile or too little bilirubin.

Red – Certain red foods can cause your poop to turn red, but red-colored poop can also be the result of intestinal bleeding or hemorrhoids.

Orange – Foods rich in beta-carotene, such as carrots, can turn your stools orange. Blocked bile ducts and certain medications can cause your poop to turn orange as well.

Yellow – A yellow or greasy-looking stool may contain too much fat — due to malabsorption or due to a lack of certain enzymes (including bile).

Bowel frequency varies from patient to patient, but a 2010 study shows that most people poop anywhere between 3 times a day to 3 times a week! Everyone has their own routine and typically you may find yourself passing stools at the same time every day. If there is no pattern to your pooping then there may be an underlying gastrointestinal issue.

Poop should smell bad, as it’s made up of all the stuff your body needs to get rid of including bacteria that give off strong smelly gases. However, truly foul-smelling stools may be the result of an infection, yeast or bacterial overgrowth, toxicity issues, Inflammatory Bowel Disease or Celiac Disease.

You’ve heard it before “you are what you eat.” However, it should be you are what you absorb. If you’re like a lot of my fibro patients, you’ll be challenged with an assortment of gastrointestinal problems, irritable bowel syndrome, reflux, heartburn, or bloating, gas, and indigestion.

If you’re not absorbing your nutrients, vitamins, minerals, etc. you’ll get little if any benefit from your health restoration protocol.

This is a chronic problem for those with fibromyalgia and leads to many of the symptoms associated with the illness including inflammation, chronic pain, fatigue, brain fog, low moods, poor sleep, IBS, and more.

Our digestive tract is more vital to our health than many people realize. The state of our health is determined not only by what we eat, but whether or not it’s being absorbed properly.

The GI tract works by breaking down, absorbing, and assimilating the foods we eat into the body. These life-sustaining nutrients that are made in the digestive system (carbohydrates, proteins, and fats that yield sugars, amino acids, and fatty acids) are the building blocks for the proper biochemical functioning of our entire body.

There are so many things that can create problems in the digestive tract: Bacteria, poor diet, age, medications, etc. Sadly, even if you’re on a healthy diet, if you have something like malabsorption syndrome or low stomach acid levels, then your health will still suffer without high-dose vitamin and mineral supplementation. 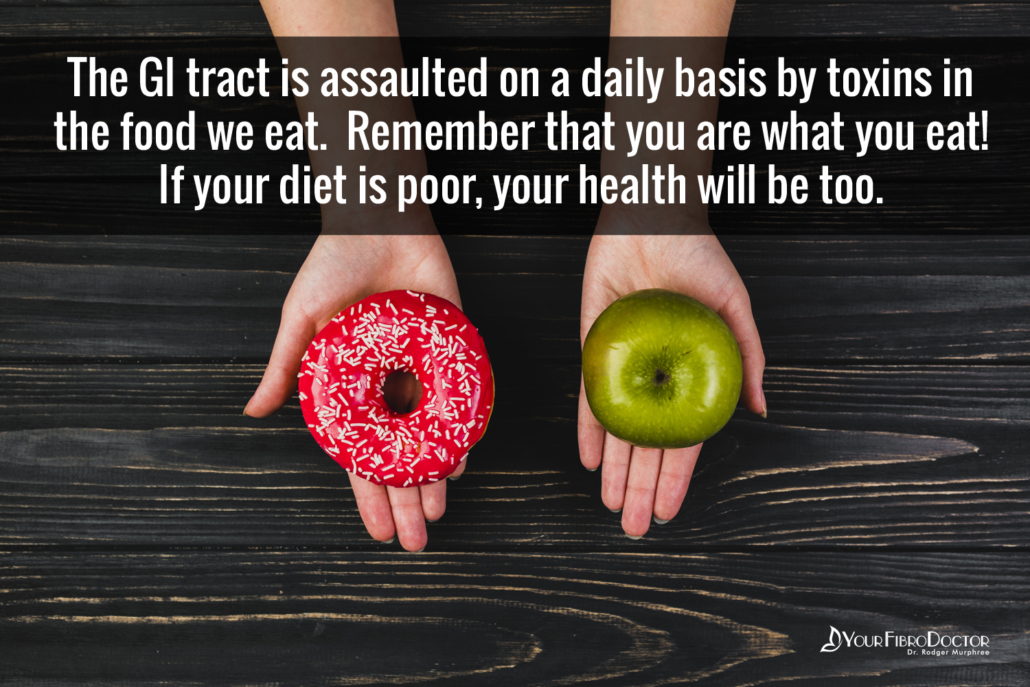 Cooking in hydrogenated oils, food preservation through bleaching, and artificial coloring removes essential vitamins and minerals and replaces them with harmful toxins. While a meal consisting of a hearty cheeseburger with lettuce and a fruit and yogurt parfait may sound like it covers the recommended food groups, this diet is chock full of unhealthy fats, modifications, and unhealthy toxins.

Because much of our food is processed, bleached, and altered, it’s no wonder that over 65% of Americans are overweight or obese and about 40 million people are suffering from conditions like irritable bowel syndrome. Additionally, about 73% of patients with fibromyalgia have IBS, or related syndromes that are associated with the GI tract.

Generally speaking, digestion involves the breakdown of the food using the mouth, salivary glands, esophagus, stomach, pancreas, liver, gallbladder, and the small and large intestines. Once food moves from the mouth into the stomach, the digestive enzymes and acids begin to do their job and break the foods down into a liquid substance called chyme. Hydrochloric acid and the enzyme pepsin work to breakdown predigested food and proteins into amino acids, respectively.

This liquid chyme moves from the stomach and into the intestine after about 4-6 hours. At this time the gallbladder secretes bile, which helps breaks down the fats. At the end of the small intestine, the food is leeched of its nutrients and absorbed into the bloodstream, then routed to the liver.

The colon, or large intestine, takes the leftover chyme and foodstuff that was not able to be used and solidifies it into feces for evacuation through a bowel movement. This should happen no more than 36 hours after eating.

The digestive system is a very busy organism that needs a special sort of balance. In those with fibromyalgia and chronic fatigue syndrome, where this balance is very often disrupted, symptoms become exacerbated. Let’s take a quick look at what kind of problems the GI tract can cause when out of balance.

You may have very low gastric acid secretion. As we age, acid secretion declines naturally. The increased alkalinized (less acidic) environment has been shown to cause several symptoms associated with fibromyalgia and CFS. Approximately 80% of people with low stomach acid complained of symptoms including soreness, burning, dry mouth, and even a low tolerance for dentures. About 34% complained of indigestion and gassiness, and 40% complained of fatigue.

This is not just a problem in the elderly. If you have fibromyalgia or chronic fatigue syndrome, you should be taking digestive enzymes, especially if you experience bloating, gas, stomach pain, constipation, and or loose bowel movements symptoms.

Additionally, GI conditions like malabsorption or intestinal permeability may play a role in the amino acid deficiency. You may not be breaking down the proteins properly.

You may have a food allergy, intolerance, or addiction. The pancreas is the first one to suffer if this is the case. It will not secrete as much sodium bicarbonate, so there will be more acid in the small intestine and protein will go undigested. It can also increase susceptibility to inflammatory reactions from the higher acid levels.

You may have a poorly functioning colon. You should be having two or more bowel movements a day. Anything less than that puts you at risk of “harboring” fecal toxins which can be reabsorbed and leaked back into the bloodstream. This kind of problem can cause autoimmune diseases, arthritis, skin disorders, bad breath, headaches, nausea, and mood disorders.

So, the bottom line is that digestive enzymes would be beneficial if you are experiencing symptoms of fibromyalgia or CFS. If you don’t have an imbalance, then your body will adjust well to the new enzymes; however, if you do have an imbalance, you will begin to see a drastic improvement in your GI symptoms.

Unlock Dr. Margaret Christensen’s 23-page eBook, Moldy? Now What?, and discover how to identify symptoms and diseases associated with mold!

IBS, low moods, and many of the symptoms associated with fibromyalgia
Scroll to top